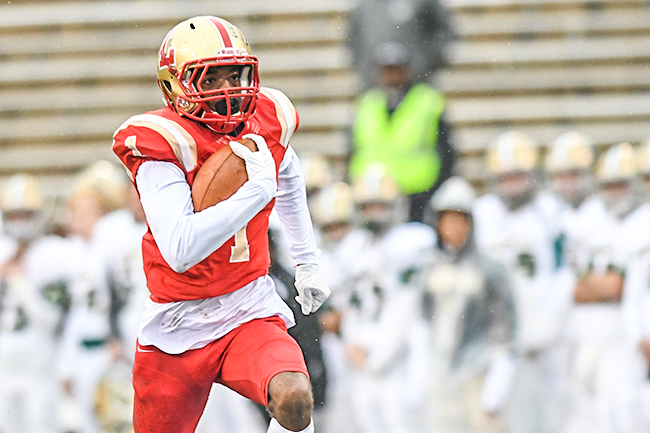 Lafayette’s Tyler Carmichael-Williams, scoring against Poplarville during the MHSAA Class 4A State Championship on Dec. 3, signed to play football at Mississippi State next fall. He will enroll in January. (Bruce Newman)

Tyler Williams’ mind had been made up for quite some time about where he wanted to play football at the collegiate level. Now it is official.

Shortly after Williams took an unofficial visit down to Starkville, he knew  Mississippi State was the place for him.

“First day I stepped on campus the atmosphere was just great,” Williams said. “I met all the coaches. Just felt at home. I loved all the facilities. Met some of the players and liked them. … It was just love at first sight.”

Mississippi State started recruiting Williams hard during his junior year after he attended a camp in Starkville his sophomore season.

In his final year with Lafayette, Williams proved vital to the Commodores championship run on both sides of the football. He was a starting receiver as well as a starting defensive back and put up numbers whenever the ball came his way. Williams finished with 38 receptions for a team-high 795 yards and nine touchdowns. The touchdown receptions were a team best as well.

“He’s just a rock,” Lafayette head coach Micheal Fair said. “He’s a guy we can count on, on both sides of the ball, when we needed a big play. He’s so talented that it didn’t matter if the other team knew it or not. I just remember countless 3 & 8s and 3 & 10s this year where he picked up big first downs. I dont know if I’ve ever coached a guy as dynamic as he can be.”

While Williams shined for Lafayette on both sides, Mississippi State plans use his talents exclusively on defense.

Williams finishes up at Lafayette this week and will be an early enrollee in Starkville in January. He plans to major in kinesiology.