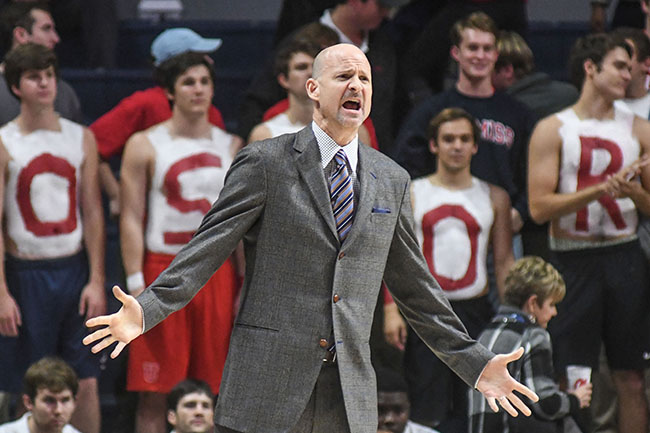 Ole Miss’ men’s basketball team is stepping outside the Power-Five conferences with its next game, but that doesn’t necessarily mean the schedule is lightening up.

Four days after their late rally came up short at Virginia Tech in their first true road game, the Rebels will return to the Pavilion on Thursday to start a four-game homestand against Murray State (7 p.m., SEC Network+). The Racers enter the game at .500 on the season, but Ole Miss coach Andy Kennedy said his team knows better than to take Murray State’s record at face value.

“They’re a team that is always dangerous,” Kennedy said. “Murray State is consistently one of the quote-unquote mid-majors that are always very, very capable.”

Ole Miss (6-3) has lost just one of its first five home games while Murray State (5-5) has lost all four games it’s played on the road, though the Racers have come awfully close to a different result in some of those games as they try to piece together their 30th straight winning season. Three of the losses have come by a combined 11 points, including a six-point loss at Middle Tennessee State — a team that beat Ole Miss by 15 at the Pavilion last month.

The backcourt duo of Tulane transfer Jonathan Stark (20.6 points per game) and Bryce Jones (13.3) lead a Murray State team with four players averaging double figures. The Racers have scored at least 73 points in all but one game but have yet to play a Power-Five opponent.

“Their guard play is really good. They’re solid inside,” Kennedy said. “They’re a team that, again, we’re going to have to play well.”

Kennedy said his team did that in spurts against Virginia Tech on Sunday until a lack of execution late ultimately doomed the Rebels in an 80-75 loss. Ole Miss fought back from a 14-point deficit in the second half despite leading scorer Deandre Burnett finishing with a season-low seven points on 2 of 9 shooting thanks to Sebastian Saiz’s 21 points and the play of the Rebels’ young guards.

Freshman point guard Breein Tyree and sophomore Terence Davis started for the second straight game. Tyree didn’t score but had three assists without turning the ball over in a season-high 17 minutes while Davis put together his first career double-double with 18 points and 12 rebounds, but Kennedy wouldn’t commit to their move to the starting lineup being a permanent one yet.

“I thought those guys did their jobs, and so it’s a day-to-day approach and a lot of it will have to do with scouting and who’s doing what, when and how,” Kennedy said. “But I thought the change has been helpful for us.”

Ole Miss will need everybody to chip in against a team that Kennedy believes will compete for the Ohio Valley Conference championship despite its slow start.

“Our non-conference strength of schedule is going to do its job,” Kennedy said. “Now we have to do ours by taking care of business and protecting the home floor.”

Ole Miss has more help than it’s had through the season’s first month now that freshman forward Nate Morris is available.

Morris made his collegiate debut against Virginia Tech after being suspended before the season began for an unspecified violation of team rules. He was also arrested on a DUI charge two days after the Rebels’ opener against Tennessee-Martin on Nov. 11.

Kennedy said Morris has “done the things necessary to rejoin the team” but will have to get in better shape with his team-related activities, including practice, being limited during his suspension. When playing well, the 6-foot-9 Morris can make the biggest impact as a rim protector, Kennedy said.

“That’s really the No. 1 thing that attracted us to him in the recruiting process,” Kennedy said. “We haven’t been able to utilize that because he hasn’t been a part of our rotation, but he’s a guy that once he gets back in shape and comfortable in all the things we’re trying to do schematically, I think he can certainly help us in that regard.”

The Rebels could use another body on their front line with Karlis Silins being banged up. Kennedy said the 6-11 freshman hurt his knee in practice recently and will undergo an MRI to determine the severity.