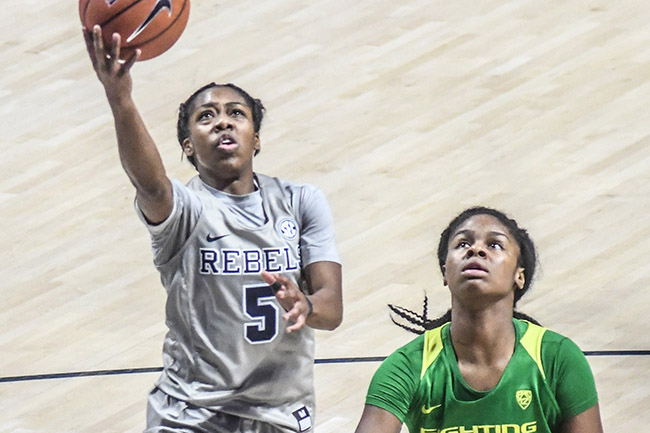 If this season is going to be a complete turnaround from last year’s disappointing one, Wednesday night may have gone a long way in helping out the cause. Ole Miss faced No. 25 Oregon and earned their first win over a ranked opponent this season with an 83-67 victory inside the Pavilion.

“I couldn’t be more proud of our basketball team” Insell said. “How hard they played, the work they put in to get to this point. We’ve been right on the verge of getting some big wins. I’ve told a lot of people we’ve got a good team, and I think we showed that tonight.”

Post play was key as senior forward Taylor Manuel helped fuel a 24-15 opening quarter by the Rebels. Manuel finished with 22 points with 10 of them coming in the first half as Ole Miss expanded their lead to 49-35 at halftime.

“We dominated that game,” Insell said. “Our goal is to win the game but to take momentum in the last five minutes of the second quarter and the first five minutes of the third quarter. If we can do that and own the momentum in that 10-minute stretch, then we can be real successful. We talk about it in every huddle. You have to deliver the first blow.”

Oregon (8-2) could never close the gap as they trailed by more than 10 points from the 9:28 mark of the second quarter for the remainder of the game. Ducks forward Ruthy Hebard tied Manuel for a game-high 22 points, and Oregon as a team was held to 45 percent shooting from the field (29 of 64). This was Oregon’s second game against a Southeastern Conference opponent as they also played against Mississippi State in a Thanksgiving tournament in Hawaii last month. They fell to the Bulldogs 75-63.

Freshman guard Sabrina Ionescu, who came into Wednesday night’s game having recorded two triple-doubles in her last three games, was held to two points in seven minutes of action as she was battling an injury to her right arm.

“We walked into an ambush tonight,” Oregon head coach Kelly Graves said. “Ole Miss played well. Their coaches had them ready, and we didn’t play well from the start. They sort of knocked us in the mouth and we didn’t respond. … I thought we handled Mississippi State’s pressure a lot better than we handled it tonight.”

After transferring in from Kentucky last year, junior guard Chrishae Rowe made her Rebel debut Wednesday night against her former team. Rowe started her collegiate career with the Ducks in the 2013-14 season before ending up with the Wildcats before landing at Ole Miss. She played 11 minutes and scored six points while grabbing one offensive rebound and had one steal.

“It’s going to take time for Rowe,” Insell said. “She was a little frustrated tonight. She’s got to figure out what we’re doing offensively and defensively, and she’s not going to play a heavy dose of minutes right now. She’ll get better and learn from this. I was real proud of her in the minutes that she played.”

Ole Miss continues their six-game homestand on Saturday when they host VCU at 1 p.m.