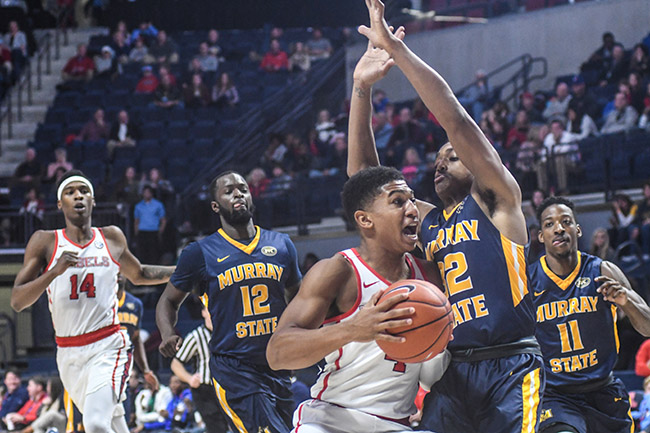 Ole Miss began a stretch of four straight games on its home floor by protecting it Thursday.

The Rebels got 24 points from Deandre Burnett in a 78-73 win over Murray State, improving to 5-1 in the Pavilion this season. Terence Davis had his second straight double-double with 16 points and 10 rebounds while Sebastian Saiz finished with 15 points and 15 boards.

Murray State began the day No. 161 in the latest KenPom ratings while the Rebels’ next two home games against Bradley and South Alabama are also against sub-100 opponents, making them virtual must-wins to keep bad losses off a postseason resume the Rebels continue to try to build in the non-conference before hosting Kentucky in their league opener Dec. 29.

It’s the rest of the time that alarmed Kennedy.

That’s when things got dicey for the Rebels (7-3), who saw a 20-point lead evaporate to two possessions in the final minute with a barrage of turnovers helping aid a late 14-3 run by Murray State (5-6). Ole Miss’ 11 turnovers matched a season-low, but the Rebels committed eight of them in the final eight minutes.

“We cut corners, and I’ve got to do a better job making sure that does not happen,” Kennedy said. “Guys short-change cuts, and a lot of that y’all won’t see, but we just short-change cuts. We didn’t finish the game the way I would’ve liked.”

The Racers, who got a game-high 27 points from Terrell Miller, got as close as 77-73 with 18 seconds left but missed their final two shots.

“We just relaxed,” Saiz said. “That’s the only thing I can say about that.”

Burnett had a season-low seven points in Sunday’s loss at Virginia Tech but finished 4 of 10 from the field and 14 of 16 from the free-throw line to bounce back with his sixth 20-plus point game this season. Yet five turnovers by the junior guard drew the ire of his coach afterward.

“I didn’t like (his game) at all,” Kennedy said. “Five turnovers. He’s supposed to be our go-to. We brought him here to be the bellcow. That’s why he came. That’s why he left Miami because he wasn’t playing. I’m playing you. I need you to lead me.”

Davis started for the third straight game and had 13 of his points in the first half, going 6 of 14 from the field and 2 of 6 from 3-point range while committing just one turnover in 32 minutes. Breein Tyree also got his third straight start at the point, though the freshman had just two points in 12 minutes.

Ole Miss built a double-digit lead late in the first half and held a 43-31 advantage at the break. The defense took over from there.

Ole Miss entered the game giving up more points than anybody in the SEC and last in the league in 3-point field goal percentage but held Murray State to 23 percent from deep (7 of 31). The Rebels held Murray State to 36 percent shooting from the field in holding the Racers to their second-lowest point total of the season.

“We defended the second half,” Kennedy said. “The zone was as active as I’ve seen it for us in our 1-3-1 (defense). I thought we had good ball movement, and we were good on the glass.”

Ole Miss is still looking to put a complete game together. The next chance comes Monday against Bradley at 8 p.m.

“We’ve shown we’re capable of playing against anybody, and we play really hard,” Saiz said. “Sometimes we’ve just got to keep it up for 40 minutes. It’s a thing to keep up the whole game, not just 25 or 35 (minutes) because against good teams, that’s going to get us beat.”