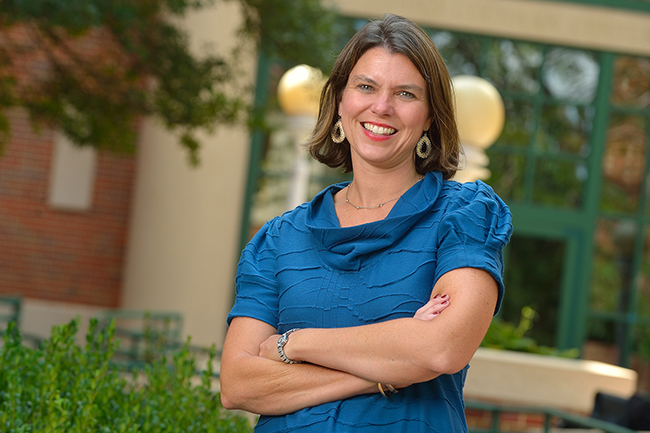 Donna Strum, chair and professor of the University of Mississippi's Department of Pharmacy Administration, will become associate provost in 2017. Photo by Nathan Latil Ole Miss Communications

Donna Strum, chair and professor of the University of Mississippi’s Department of Pharmacy Administration and research professor in the Research Institute of Pharmaceutical Sciences at the School of Pharmacy, will become associate provost in 2017.

A native of Germantown, Tennessee, Strum earned three degrees from UM, including a doctorate in pharmacy administration in 1999. After eight years on the faculty of the College of Pharmacy at the University of Arkansas for Medicine Sciences, she returned to Ole Miss in 2008 as chair of pharmacy administration.

“I love being here at the university, and it was exciting to see this position open up because I thought it would be a good opportunity to really contribute to the university in a broader capacity,” Strum said.

During her eight years as chair, she helped to restructure the graduate curriculum, decreased the time needed to earn master’s and doctoral degrees in pharmacy administration and helped the department win the university’s Excellence in Promoting Inclusiveness in Graduate Education award.

Strum also helped create the “Educating Pharmacists in Quality” program, a teaching tool aimed at improving medical safety and quality of pharmacy care. The program, which is used around the world, won the 2015 Duncan Neuhauser Award from the Academy for Healthcare Improvement, and won Strum the 2016 Faculty Instructional Innovations Award from the UM pharmacy school.

“I have every confidence that Donna will do well as associate provost,” said David D. Allen, UM pharmacy dean. “Her balanced leadership of the Department of Pharmacy Administration has directly resulted in many of our school’s success and innovations.”

As a pharmacist and professor, Strum has focused on quantifying and measuring the effectiveness of pharmaceuticals and pharmacy care. She hopes this interest in evaluating and improving established processes will serve her when dealing with universitywide issues.

“I’m data-driven,” Strum said. “I appreciate data when making decisions, so I think that I’m capable of taking a lot of different pieces of information and sorting through them to find the best path.”

Interim Provost Noel Wilkin said he is honored to have Strum join the provost’s office.

“It is clear that she has distinguished herself as a respected leader,” Wilkin said. “She will bring unique abilities, perspectives and energy to the work that we do to facilitate the success of the university.”

Strum said that she will miss her department and her pharmacy research, but that she is looking forward to working with and contributing to the provost’s office.

“I hope to make a meaningful difference at this university for faculty and students, and I hope that being in a central position will allow me to make a positive impact across campus,” she said.

“She seeks input from individuals before making decisions and is fully capable of making and justifying decisions, even those that are challenging and potentially controversial,” Bentley said.

“She knows what it takes to be productive and successful, and understands the barriers to, and facilitators of, success. She understands the many facets of a comprehensive university such as the University of Mississippi.”