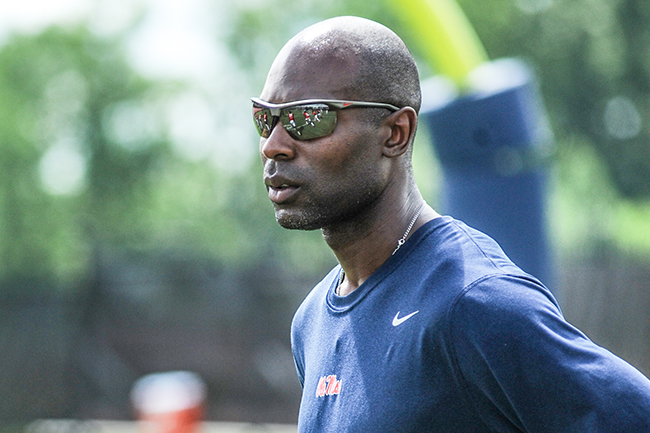 Ole Miss’ shakeup within its coaching staff continued Friday with a pair of assistants on the move in different capacities.

Receivers coach Grant Heard is expected to join former Ole Miss assistant Tom Allen’s staff at Indiana. Heard had been on staff each of Hugh Freeze’s five seasons at the helm.

Fox Sports’ Bruce Feldman first reported the move Friday. The hire has not been officially announced by Indiana, but Freeze confirmed the Hoosiers’ interest in Heard, who would likely serve the same role and coordinate Indiana’s passing game.

Meanwhile, safeties coach and special teams coordinator Corey Batoon will move back to an undetermined off-field position should he stay in Oxford, Freeze said. Batoon’s time as an on-field assistant lasted just two seasons after being promoted from his role as assistant athletics director for recruiting operations following the 2014 season.

Batoon’s name has been linked to other jobs, including as a possible assistant at Florida Atlantic on Kiffin’s staff. Kiffin, Ole Miss’ former defensive line coach, is leaving to be the Owls’ defensive coordinator under his brother, head coach Lane Kiffin.

“We love him and his knowledge of the game,” Freeze said of Batoon. “Hope he’ll be able to stay here and assist us in some role. Not sure what that is yet, but we’d love to keep him in the building, giving (defensive coordinator) Wesley (McGriff) some freedom to help me build the defensive staff the way he sees fit.”

With Heard on the way out, the Rebels need a receivers coach, special teams coach, defensive line coach and linebackers coach under offensive coordinator Phil Longo and McGriff, whose hires were officially announced Friday. Cornerbacks coach Jason Jones will stay on to help McGriff coach the secondary.

McGriff coached Auburn’s secondary this season and will remain with Auburn through the Tigers’ Sugar Bowl matchup with Oklahoma on Jan. 2 before arriving in Oxford the next day.

McGriff and Longo said they don’t have a timetable on filling out the staff on their sides of the ball. The process could include even more changes.

“It’s time for some change to maybe revive us a little bit,” Freeze said.