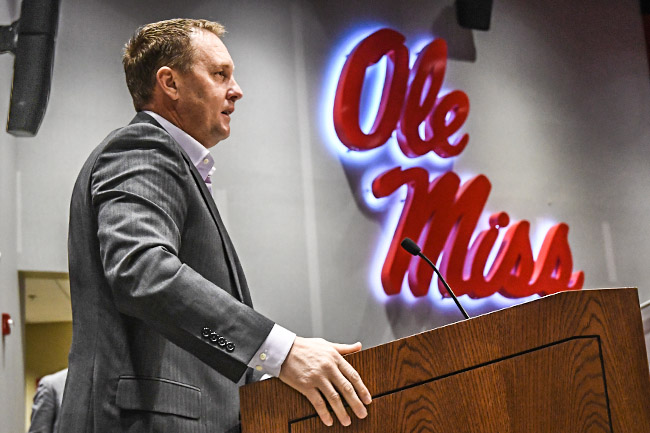 Hugh Freeze got right to the point.

After officially announcing Phil Longo and Wesley McGriff as his choices to fill the offensive and defensive coordinator vacancies, respectively, at a press conference Friday, Ole Miss’ coach immediately went into why: he believes they’re a fresh solution for the Rebels’ biggest problems.

“That was the whole philosophy behind the search of these guys,” Freeze said.

Specifically, Freeze said the running game, red-zone production and third-down efficiency bothered him when evaluating the offense at the end of a 5-7 season — his first losing season in his five-year tenure in Oxford. Dan Werner, who had been Freeze’s offensive coordinator each of those seasons, was fired Dec. 8.

For all the yards the Rebels rolled up this season — Ole Miss is tops in the Southeastern Conference in passing offense and fourth in total offense — they struggled to get the ones they really needed. Ole Miss picked up the necessary yardage on third down just 40 percent of the time, which ranks 67th nationally. The Rebels got points 84 percent of the time when they got inside an opponent’s 20-yard line, but 17 of their 48 scores were field goals.

Longo spent the last three seasons in charge of one of the top offenses in the Football Championship Subdivision at Sam Houston State with the Bearkats never converting less than 42 percent of their third downs under Longo’s direction. SHSU converted at a 47-percent rate this season.

The Bearkcats scored 57 touchdowns on 71 trips to the red zone this season and 49 touchdowns on 73 trips the year before. In Longo’s first season with SHSU in 2014, the Bearkats scored 39 red-zone touchdowns and got points on 90 percent of their trips, a clip that ranked eighth nationally.

“The last three years have been pretty phenomenal when you look at 80 percent scoring touchdowns in the red zone, close to 70 percent third-down efficiency and being balanced in rushing the football,” Freeze said of SHSU’s production under Longo.

Balance has been hard to come by for Ole Miss.

In the last four seasons, the Rebels haven’t been better than seventh in the SEC in rushing and plummeted to 12th this season at 149.4 yards a game. The Rebels eclipsed 150 rushing yards just once in an SEC game and averaged less than 4.3 yards a carry.

Longo is a disciple of the air-raid offense, but his offenses have churned out yards on the ground. SHSU is 37th nationally this season at 179 rushing yards per game, and it’s the least productive ground game the Bearkats had under Longo, whose SHSU offenses piled up 3,817 rushing yards last season and 3,866 in 2014 to lead the Southland Conference.

It didn’t help that Ole Miss was without two of its top three running backs all season in Jordan Wilkins (academic credits snafu) and Eric Swinney (torn ACL), but Freeze said the talent at the position still needs to be upgraded. Longo will join the Rebels’ effort in recruiting their top target, Clinton five-star running back Cam Akers.

“We’re trying to recruit the best in the nation at that spot, and that helps you more than anything,” Freeze said. “As you watch our cut-ups and you see that you get running backs in a situation with a blocking scheme that we had in some one-on-ones, you expect more explosive plays than what we’ve been able to generate. Recruiting sure can help that.”

Opposing offenses didn’t have nearly as much trouble reaching the end zone against Ole Miss once they were close, scoring a whopping 94 percent of the time in the red zone with 35 touchdowns in 48 trips. Ole Miss’ 120th-ranked run defense was also a sore spot in the final season under the direction of Dave Wommack, who retired after 38 years of coaching.

Freeze is also counting on the 48-year-old McGriff’s experience coaching up the back end of defenses to help the Rebels limit big plays in the passing game. McGriff, who spent the 2012 season as Ole Miss’ cornerbacks coach, was the defensive backs coach for the New Orleans Saints from 2013-15 before taking a job as Auburn’s secondary coach this season.

“Those were the three critical areas I thought we had to look at closely in hiring a defensive coordinator, and his name just kept coming to the top of (the list),” Freeze said.

McGriff was part of a defensive staff at Auburn that has the Tigers fourth nationally in red-zone defense (71 percent), fifth in scoring defense (15.6 points per game) and 21st in run defense (124.8 yards per game) heading into their Sugar Bowl matchup against Oklahoma on Jan. 2.

Auburn is also allowing just 10.7 yards per completion, the fewest in the SEC.

McGriff, who also had SEC coaching stints at Kentucky and Vanderbilt, now has the experience Freeze believes has him prepared for his first coordinator job at the Football Bowl Subdivision level. McGriff will implement a 4-3 base defense that has the ability to be multiple in its looks.

“We’ll run a 4-3 attacking defense,” McGriff said. “I have a lot of ideas from my past experiences in terms of what we’ll do on defense, but I think it’s all about the guys that are in the room. You have to formulate a plan based on the talent that’s in the room.”

Those rooms at Auburn and many other SEC schools were filled with more talented players than what Ole Miss had this season, another reason Freeze said he was drawn to McGriff after recruiting with and against him the last five years. McGriff played a key role in recruiting Robert Nkemdiche and Tony Conner among others for the Rebels in 2013 as Ole Miss pieced together what was the best signing class in school history at the time.

Freeze said it’s not a matter of if McGriff will raise the talent level on defense, particularly at a linebacker position that stayed in constant flux this fall, but when.

“He’s one of the better recruiters I’ve ever faced,” Freeze said. “As we know, you’ve got to have great players on the defensive side. There’s no doubt he will assist in that.”