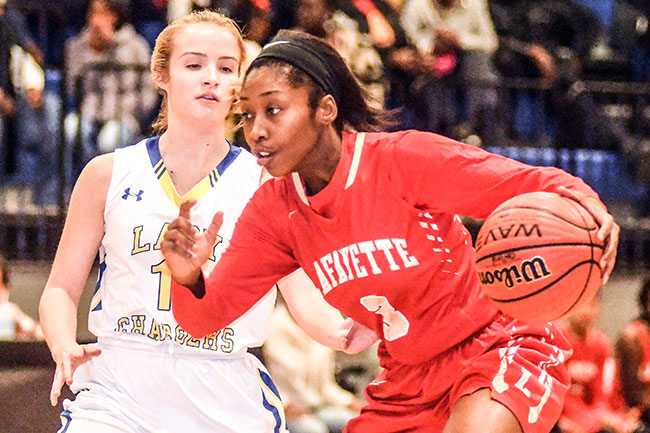 Perfection remained for two teams at the end of Friday night as Oxford and Lafayette renewed the Crosstown rivalry on the basketball court. It is the only time this season the two schools will meet.

The night started with the Lafayette girls staying undefeated on the season, beating Oxford 57-29 inside the packed OHS gym.

The first quarter was as close as the game would be between the two rivals as Lafayette (8-0) led Oxford, which trailed the entire game, 14-11 after the first eight minutes of play. The Commodores used the long ball effectively in the first half, connecting on six 3-pointers to put the Chargers (2-7) in a 32-13 hole at halftime.

“Oxford’s young, they play hard and they were very scrappy tonight,” Lafayette head coach Shayne Linzy said. “We did what we were supposed to do. There were times I thought we could do a little better job blocking out. … The first quarter, I think they were shocked (Oxford) was going to play that hard. I was not. The second quarter, we held them to two points and started playing.”

The struggles continued for Oxford as they are still trying to find their identity without any senior leadership. Junior Jordan Freeze led the Chargers with 10 points and was the only player in double figures with Lucy Moore, Kelsey Wilborn and Claire Wooten following with four points each.

“We’re young, but we keep making the same mistakes every game,” Oxford head coach Cliff Ormon said. “Turnovers are just our downfall. We’re really struggling with turnovers right now. Just learning those new roles is difficult and been a little bit of a challenge. … A lot of times, you have a plan going in and, this year, a whole new wrinkle thrown in really quick pretty much as the season opened.”

The zero stayed in the loss column for the Oxford boys team as well, even though it may have taken a little more effort than they anticipated. The Chargers defeated Lafayette 75-39 in the nightcap of the doubleheader.

After taking a commanding 24-8 lead into the second quarter due in part to senior Jarkel Joiner’s 18 points in the first quarter, Oxford (7-0) had to fight off a charge by the Commodores (2-5). Hogan Linzy scored all of his team-high 11 points in the second quarter, fueling a 16-10 run to make it a 34-24 Charger lead at halftime. The Commodores got it as close as eight points during the period.

“Hustle and just playing basketball,” Lafayette head coach John Sherman said of what was working for his team in the second quarter. “Going and getting some offensive rebounds and putting it back. We just didn’t make the plays.”

Joiner was held to a total of three points in the second and third quarters but scored 11 points in the final period to finish with a game-high 32 points. Terry Williams finished with 22 points and helped Oxford outscored the Commdores 41-15 in the second half. Junior Drew Bianco scored six points but had a team-high eight rebounds in his first taste of the Crosstown rivalry on a basketball court as he is seven games into his basketball career at Oxford.

“(Lafayette) was playing football on a basketball court,” Oxford head coach Drew Tyler said of the Commodores’ physical play in the first half. “Once we really went at them in the second half and got aggressive with our defense, we made them play horizontal basketball. Got some easy layups and steals.”

It is the last time either school will play in Oxford as they will begin a slate of holiday tournaments ranging from Tennessee, Alabama and even Missouri over the Christmas break starting this week.