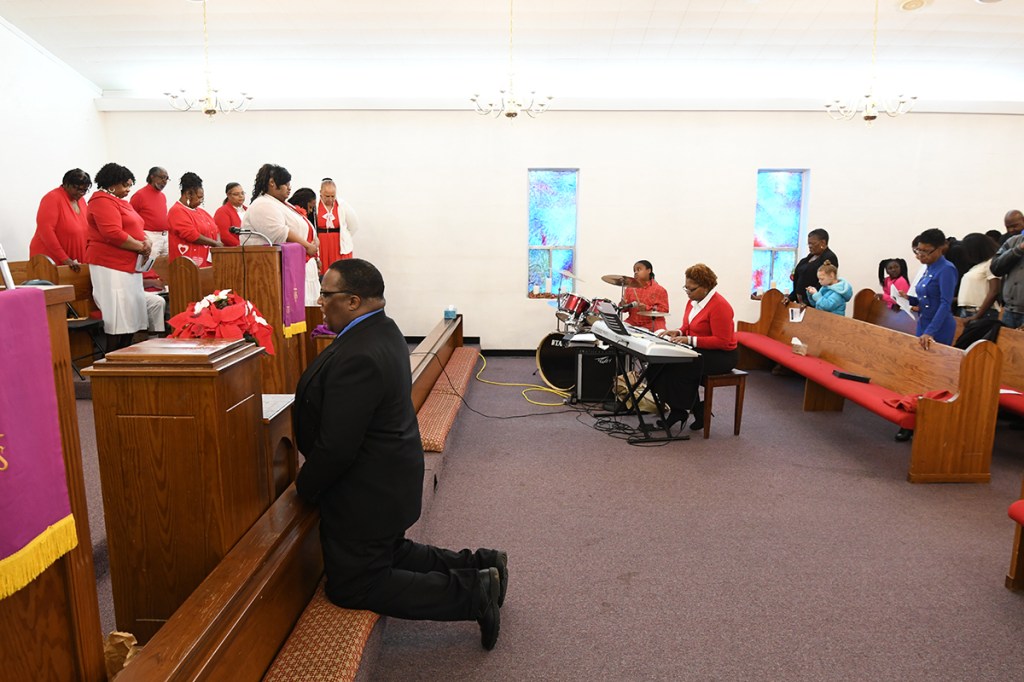 Sunday service at Oxford First United Methodist Church begins with a song from the leader of the chancel choir. An atmosphere relaxed and warm unfolds while some in the congregation filter in and others sing along.

Oxford First is not a new church, but rather a newly combined congregation of Burns and Hammitt Hill United Methodist churches, which were separate and shrinking before deciding to merge in Fall 2015.

“When I came to Oxford, this place was struggling,” Diggs said. “Probably within seven or eight months, I was told about another congregation that [the Mississippi Annual Conference] wanted me to take in and work with too.”

Burns and Hammitt Hill were representative of a well-documented national trend of decreasing church affiliation.

Diggs suggests such decline does impact churches economically, but his focus is always on his congregation and the community.

“I don’t get caught up in numbers,” Diggs said. “We focus on the people, how we can best enhance God’s kingdom— not how many people we can get to join this church. That’s irrelevant.”

Diggs empathizes with his congregation, invoking familiar frustrations universally felt, then venturing, “I know someone here knows what I’m talkin’ about.”

As a pastor, Diggs seems to function as part-therapist, but in the sanctuary the remedy is clear and present.

The crown of thorns adorning the wall behind the chancel is a reminder.

The church carries a strong faith in God through to their mission of community outreach, a mission enhanced by the merger. With newly consolidated resources and focus, Diggs sees his church, along with others in Oxford, playing an important role in the life of the community.

“You see more of an effort being put forth for the community to be unified, and I think that the Church is a catalyst in doing such,” Diggs said. “Trust me when I tell you that doesn’t happen in all communities. The willingness to work together is something to behold here.”

James Milliner came to Oxford First from Salem United Methodist, a church in the same district as Burns, but one that’s chosen to remain independent. The choice for him and his wife came down to the offerings available at a church like Oxford First.

In his mind, mergers such as that of Burns and Hammitt Hill offer a way to strengthen a congregation.

“It concerns me that we have three or four different congregations … all doing the same thing,” Milliner said. “I think that in order for the church to grow, for the congregation to grow, you need a full-time pastor that’s available at all times. I think that the small rural churches will become a thing of the past.”

At Oxford First, the merger has brought strong and united leadership, and this has opened up opportunities for the congregation. For instance, some church members will soon be going on a mission trip with members of Oxford-University United Methodist, a congregation with whom Oxford First has forged a strong relationship.

Partnerships such as this, Diggs believes, pay dividends in the long run.

Before Holy Communion commences, Pastor Diggs calls the youth forward to speak to them directly. A small group, young children and teenagers, comes hand-in-hand to the front; a little girl among them too excited to walk, bounces.

For Oxford First member Keith Searcy, these youth represent another, more personal, benefit of the merger. Searcy attended the original Burns Belfry church on Jackson Avenue as a boy with his mother. As he grew older, his commitment to the church was inconsistent, but Burns was what he knew and he kept coming back.

This newly united church has, for Searcy, resulted in a newly-rekindled family connection.

The well being of the children of Oxford First is a high priority to the congregation, but this concern extends to all children of the Oxford community.

On Sundays and Wednesdays, the church picks up 15 to 25 kids in need, brings them to service and feeds them. Education is the focus on Wednesdays. Pastor Diggs has made it mandatory that the children bring their school books with them to do homework and receive help if needed.

Thanks to the enhanced resources available after the merger, along with the generosity of friends at Oxford-University Methodist and of philanthropist Richard Scruggs, the education ministry isn’t limited to only church members. The church is now equipped with wireless internet and new computers available to all members of the community for after-school tutoring and even a community-wide GED program.

“Oxford is a place of great wealth and prosperity,” Diggs said. “However, there is a certain segment of society that is completely invisible to the average person, and that is the people who live in poverty. The thing we’re trying to do is help those who are underprivileged, to help them to see the American dream and get them to see that with God all things are possible.”

For now, services and activities are held at the Burns United Methodist building on Molly Barr Road, but this structure is showing its age. It is situated on property that has become very valuable as Oxford has grown and changed. Selling this property is the first step to financing a new church facility and will help the congregation to continue serving the community.

“We are thankful and hopeful that the city will continue to help us in the way that they are now in trying to sell this property,” Diggs said. “Mayor Pat Patterson has been very helpful to us, as has the Board of Aldermen and my neighbor Ulysses Howell.”

After the service concludes, the congregation hangs around a while. The pastor talks with people, makes jokes, asks a boy about his school work.

The relationship Diggs shares with his church extends beyond one of concern for their spiritual well-being. He has a clear vision of where Oxford First fits in the town’s religious landscape.

“We’re not here trying to make a name for ourselves, we’re here to help the community,” Diggs said. “That’s what we’re doing.”