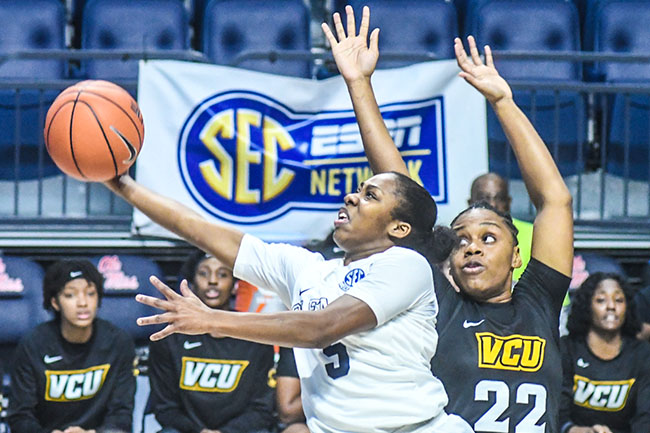 Coming off their first top-25 victory of the season over Oregon just three days prior, the Ole Miss women’s basketball team may have been expected to have a hangover coming into Saturday’s contest against VCU. That may have been the case, but it lasted for only a half as Ole Miss defeated the Rams 77-57 inside the Pavilion.

The win was the Rebels’ third straight after suffering a loss at West Virginia on Dec. 4 and also gave them their best start at home (8-0) under head coach Matt Insell, who is in his fourth season at Ole Miss, and best since the 2012-13 season when they won their first seven games. It also marked Insell’s 50th career win at Ole Miss.

“We’ve had some interesting ones to get to 50,” Insell said. “You wish you’d get there quicker.”

Separation proved to be an issue for the Rebels in the second quarter as well as VCU (6-6) kept pace, trailing only by 10 as Ole Miss took a 39-30 lead into halftime.

“We weren’t very good defensively in the first half,” Insell said. “That’s uncharacteristic of us. We’re usually really good. We weren’t in tune with what was going on and why that was, I don’t know.”

The second half was a different story as Ole Miss outscored VCU 38-27 for the winning margin. The Rebels were led by junior Chrishae Rowe and her game-high 14 points. It was Rowe’s second game of the season as she debuted in the Rebels’ win over Oregon on Wednesday. She doubled her minutes with 22 on Saturday and also had two rebounds.

Shandricka Sessom followed Rowe with 12 points while Taylor Manuel and Alissa Alston each scored nine. Erika Sisk and Torrie Lewis each chipped in eight points and Shequila Joseph scored seven. Sisk had a game-high 10 assists, which was the first time Ole Miss has had a player with 10 or more assists since Valencia McFarland in 2014, and Manuel pulled down a team-high six rebounds.

The Rebels were without their leading scorer in Madinah Muhammad, who sat out due to a foot injury.

“I thought Chrishae Rowe played good today,” Insell said. “I thought she got back in rhythm. It’s a work in progress for her. … It’s a good problem to have. We have so many good players and sometimes some players may not get the time that they may deserve because the person in front of them deserved time, too.”

VCU was led by Mooriah Rowser’s team-high 12 points. Rowser, who was the only player in double figures for VCU, scored the Rams’ first eight points of the second half to make it a 45-38 deficit midway through the third quarter. Ole Miss would close out the quarter on a 14-4 run.

Other VCU leaders were Galaisha Goodhope with eight points and Bria Gibson with seven.