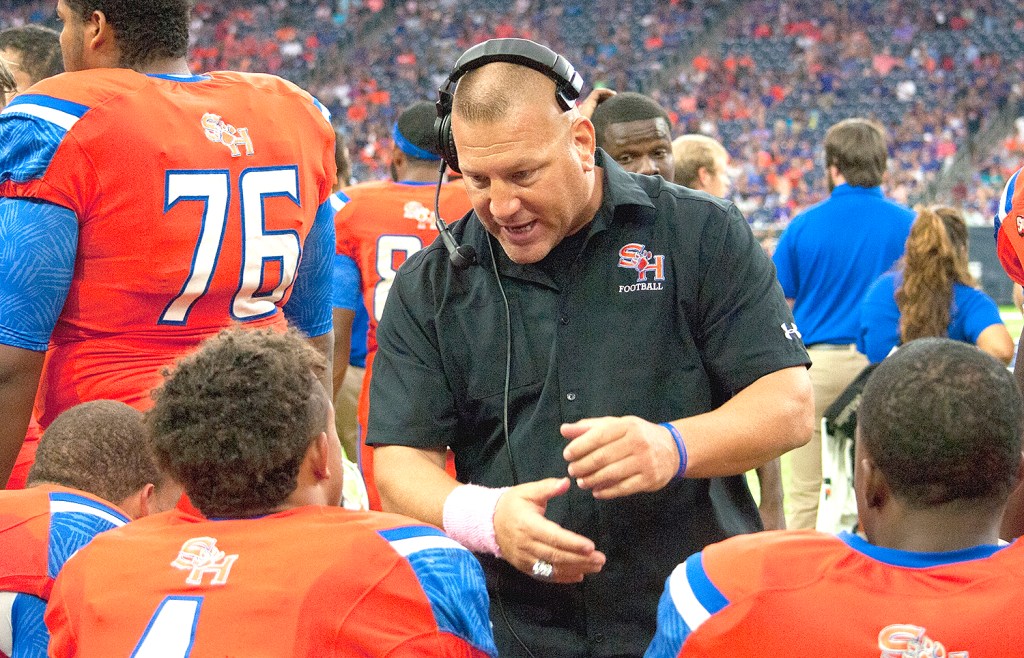 New Ole Miss offensive coordinator Phil Longo runs his own version of the air-raid offense that was just as prolific running the ball during his three seasons as the coordinator at Sam Houston State. (Brian Blalock/SHSU)

Before Hugh Freeze ultimately decided on his new offensive coordinator, Ole Miss’ coach wanted to get the opinion of some of those that know Phil Longo’s coaching style the best.

That included Jeremiah Briscoe, Longo’s quarterback at Sam Houston State this season who operated the most prolific offense in the Football Championship Subdivision. Briscoe threw for 4,602 yards and an FCS-best 57 touchdowns and was part of Longo’s offense last season that produced an eye-popping 7,975 yards, the third-most in FCS history.

Freeze brought up Longo with former Texas Tech coach Mike Leach and the Red Raiders’ current coach, Kliff Kingsbury. Longo began to develop his version of the air-raid offense with visits to Texas Tech when Kingsbury was putting up all kinds of record numbers as Leach’s quarterback in the early 2000s, and he’s still tight with both today.

Those conversations only served as confirmation as to the direction Freeze went in finding a replacement for Dan Werner, who was fired Dec. 8 after serving as Freeze’s offensive coordinator and quarterbacks coach each of his first five seasons in Oxford.

“They did not have enough good things to say about him,” Freeze said.

Now, after 17 seasons running his own version of an up-tempo attack at the Division III, Division II and FCS levels, the 48-year-old Longo has his first shot at college football’s highest level as Ole Miss’ offensive coordinator.

“I think when you’re a competitor, and I am like most coaches, you want to have the opportunity to do what you do against the very best,” Longo said. “There’s no question we’re going to see the best in the SEC, so it’s a dream come true.”

Longo’s offenses throw the ball a lot, but he runs a tweaked version of the air raid that’s not as one-dimensional as the name might indicate. Freeze wanted someone who would implement a system similar to the fast-paced one that made him a hot name in the coaching ranks half a decade ago but also one that would bring more balance to an Ole Miss offense that’s struggled to find much during Freeze’s tenure.

Longo referred to it as adapting the offense to his personnel.

“I think it’s going to be more about how good we are when we run it and when we pass it, not trying to accomplish 40 runs and 40 passes every game,” Longo said.

Sam Houston State was second in the FCS this season in passing offense with Briscoe throwing to a trio of 900-yard receivers, but the Bearkats finished in the top 40 nationally in rushing all three seasons under Longo’s direction. Longo, who coached two 1,000-yard rushers at SHSU, had the Southland Conference’s best rushing attack in 2014 and the FCS’s ninth-best running game in 2014 and 2015 as the Bearkats piled up 7,683 rushing yards in those seasons.

SHSU’s 2,327 yards on the ground this season were the fewest under Longo, a figure that’s still good for 37th nationally and is more than Ole Miss has tallied in three of its five seasons under Freeze. SHSU ran it 50 or more times in 11 games the last three seasons, including 72 times against Southern Utah last November.

The run-pass options, or RPOs, in Longo’s offense — where the quarterback can choose to throw the ball on a run play based on what the defense is showing — are limited to about “four or five base plays,” he said, while none of them require the offensive line to alter its blocking scheme based on the decision.

“It’s just my opinion … it takes away from your aggressiveness up front, and we don’t want to do that,” Longo said. “When we call a run play, that’s what the o-line knows and that’s what we expect from them.”

The traditional passing game in Longo’s offense isn’t all that traditional. Where most up-tempo offenses put the onus on the quarterback to communicate the play call, get receivers and running backs lined up, set the protection, see how the defense is set up before the snap and then read it after the snap, Longo said he made the decision years ago to take some of the burden off his signal callers.

“(Quarterback) is the most important position on the field with regard to orchestrating the offense, and I just felt at that time that we were handicapping the best player on the field,” Longo said. “We just decided to go in a different direction, and that approach was to delegate some of the unnecessary responsibility that we were giving the quarterback to some of the other positions.”

Once the ball is snapped, Longo teaches his receivers to adjust their routes based on the coverage they’re getting instead of the other way around. SHSU had the FCS’s 16th-best passing attack in 2015 before becoming one of the top two this season.

Freeze said he will work with Longo to put together weekly game plans but added the plays are Longo’s to call, a deviation from when Freeze and Werner shared playcalling duties depending on the situation.

“Someone that’s done it as long as he has within a system, it comes instinctive to him,” Freeze said. “I think that’s something we needed.”

Longo knows what he’s inheriting at quarterback in Shea Patterson, who got three games of experience this season after Chad Kelly’s knee injury forced the five-star signee into action. In watching tape and talking with the rest of the coaching staff, he’s gotten an overview of the rest of the offensive personnel the Rebels have returning, including running backs Jordan Wilkins (academic credit snafu) and Eric Swinney (torn ACL), adding, “I feel like I’m walking into a situation that already has some existing talent that can be very, very productive.”

Now it’s crunch time in recruiting, and Longo will get to work in trying to bring in more pieces for his offense and putting them together how he sees fit.

“All the pieces in our puzzle are squares,” Longo said. “So when we need to take any three that we want for a particular play or a particular attack for that week, we can put them together and they fit nicely. That’s the best way I can think of to describe the fact that we can be multiple and we can be flexible but it’s all going to fit within the framework of the offensive system at the end of the day.”