Ole Miss employees give and receive through Books and Bears program 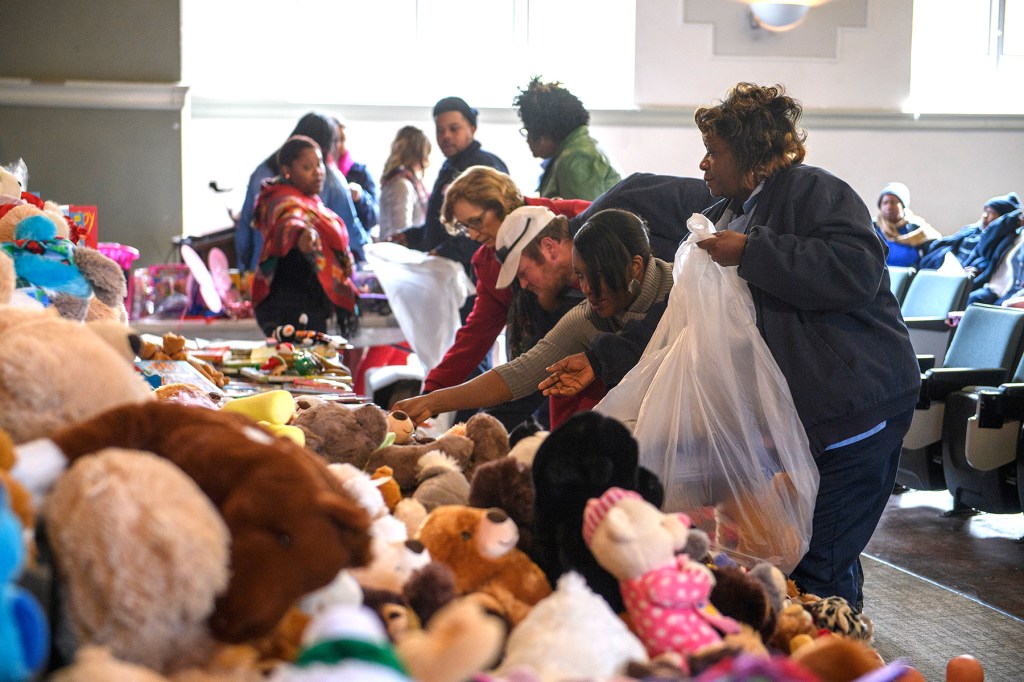 “You haven’t been blessed until you are able to bless someone else,” Donald Cole said Friday morning (Dec. 16) at the University of Mississippi’s 19th annual Books and Bears program. And plenty of blessings were both given and received at the event, which touches families across north Mississippi.

Several hundred UM Facilities Management Department employees piled into Fulton Chapel, each given a large, empty bag and a number. They sat patiently, but eager for their numbers to be called allowing them to come and receive a book, a bear and a toy.

And while it was seasonally cold outside, the soon-to-be recipients were warmed within by the generosity displayed by their benefactors.

“Books and Bears is truly a blessing program,” said Cole, special assistant to the chancellor for multicultural affairs.

Sponsored by the university’s Black Faculty and Staff Organization, the annual event distributes more than 1,000 gifts, all donated by Ole Miss faculty, staff, students and alumni. Each year the total number of donations reaches a new record.

Friday’s Books and Bears was the first for both Chancellor Jeffery S. Vitter and his wife, Sharon. Both were in attendance with Sharon Vitter pulling the very first number, which was 262. It happened to belong to Iesha Johnson of Oxford, a new employee in Housekeeping.

“Without this event, lots of kids wouldn’t have very much on Christmas Day,” said Johnson, who took home presents for her 2-year-old son, Jaden. ”Every little bit helps and a little goes a long way.”

The chancellor told the employees that their daily work does not go unnoticed or unappreciated.

“We depend upon what all the staff do to make this university the beautiful place that it is,” Vitter said. “Thank you for all that you do, and have a great holiday.”

Tasha Jones, another new Housekeeping employee from Oxford, received the first of more than 20 bicycles given away was “big” gifts.

“This feels really great,” she said. “I’m truly thankful to be here and to get such a nice gift.”

Locksmith Bill Herron of Batesville, who has attended every Books and Bears distribution since the program began, recalled how Books and Bears has benefited his family over the years.

“The first time I attended, I won a bicycle for my youngest son, who was 13 at the time,” Herron said. “Now, I’m taking gifts from here home to my grandkids, ages 7 to 16. This really helped me financially.”

Specificity is not a requirement for Mike Siner of Water Valley.

“It doesn’t have to be any particular thing for my nieces and nephews,” said the 10-year employee. “Just seeing the excitement on their faces over whatever they receive is a blessing.”

The donations were noticed and greatly appreciated by BFSO officials.

“The thoughtfulness and outpouring of support from the UM family has been nothing short of amazing this year,” said Jackie Vinson, project coordinator in the Office of the Vice Chancellor for Academic Affairs. “By helping others, we have truly captured the spirit of the holidays.”

The spirit of generosity generated by the program appears to be contagious.

“I don’t have any children myself, but this is a way to give back to members of our Ole Miss family who may feel they are underappreciated,” said Stephanie Brown, staff assistant the Vinson’s office. “I just wanted to help him and his family out in any way that I could.”

BSFO members expressed their pleasure at the assistance in obtaining toys and books for the children.

“Over the years, Books and Bears just keeps growing and growing,” said Jackie Certion, senior academic adviser in the College of Liberal Arts. “We outgrew the Union Ballroom and the Jackson Avenue Center. Next year, we may need the Ford Center and maybe The Pavilion at Ole Miss after that. Who knows?”

New teddy bears, children’s books and toys have been collected for children of custodial and grounds workers each year since 1997.