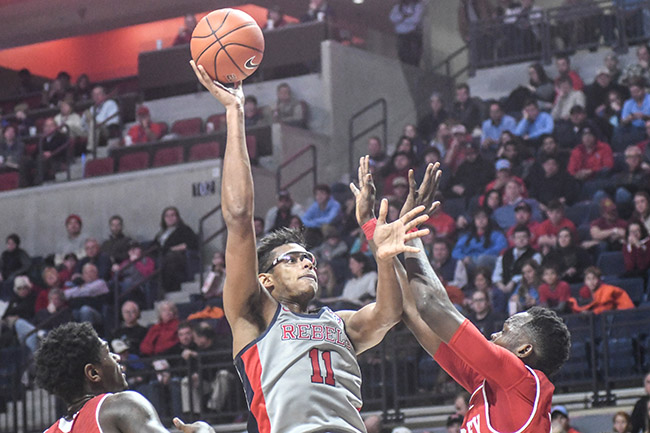 Ole Miss made easy work of Bradley at The Pavilion, continuing its four-game homestand with a 66-49 win. Terence Davis led all scorers with 19 points while Cullen Neal had 12 points and Sebastian Saiz added 10 in the Rebels’ most lopsided victory of the season.

It was just the second game Ole Miss has won by double digits this season and came four nights after Murray State cut Ole Miss’ 20-point lead to two possessions before the Rebels held on for a five-point win Thursday.

But the Rebels kept Bradley at a distance throughout, going up double digits late in the first half and leading by as many as 27 in the second.

Saiz pulled down 13 rebounds for his sixth double-double of the season and had a career-high six of the Rebels’ 10 blocks. Davis was 8 of 13 from the field, 3 of 6 from 3-point range and grabbed six boards for the Rebels (8-3), who will get one more non-conference tuneup Thursday against South Alabama before hosting No. 6 Kentucky on Dec. 29 to start Southeastern Conference play.

“Once I see the ball go in, I’m about to have a good night,”said Davis, who’s averaging 15.5 points since being inserted into the starting lineup four games ago. “Once I see it go in, it’s good.

Deandre Burnett, the Rebels’ leading scorer, went just 1 of 7 from the floor and had five points — the second time he’s been held to single digits in the last three games — but matched Neal with a team-high five assists. The Rebels had a season-high 19 assists on 23 made field goals.

Kennedy shook up the starting lineup again by going with Cullen Neal and Donte Fitzpatrick-Dorsey, whose length bothered Bradley’s smaller guards in his first start of the season. The Rebels held Bradley (5-7) to 25 percent from the floor in the first half and a season-low 31 percent for the game as the Braves matched their lowest point total of the season.

Ole Miss forced 17 turnovers, 13 of them coming on steals. Darrell Brown was the only player to reach double figures for Bradley with 14 points.

“When you break down and you do drills defensively, you always break them down into worst-case scenario like if everything breaks down, these are the rotations that you make, and our guys were not fortifying that first line of defense,” Kennedy said of his team’s defensive struggles early in the season. “We were always in rotations, and I thought they were unnecessary. We eliminated some of those extra rotations, we tried to simplify things, and I think our guys have responded.

“Defensively it’s as well as we’ve played in a long time.”

Davis had 14 of his points in the first half, making two of his first three 3-pointers and often getting out in transition to finish the first 20 minutes 6 of 8 from the field. The Rebels fell in love with the 3 early in their half-court sets with 14 of their first 25 shots coming from deep while making only three of them.

But the Rebels knocked down three of their final four 3s of the half to spark an 11-0 run that gave them a 38-19 lead at the break. Bradley didn’t get any closer than 16 the rest of the way.

“Overall really pleased,” Kennedy said. “I got a lot of guys minutes and didn’t have to play anyone extended minutes, which hopefully will help us with a quick turnaround for Thursday.”