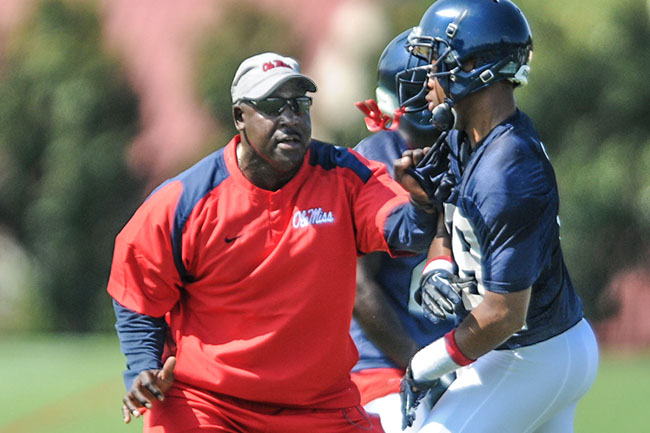 Wesley McGriff gave a simple explanation as to what kind of defense he plans to implement at Ole Miss.

It’ll be a little more complicated than that, but McGriff wants his plan in trying to get there to be just as elementary as he returns to Oxford to take over a unit that was one of the nation’s worst this season. Ole Miss coach Hugh Freeze tabbed his former assistant last week to be the successor to Dave Wommack, who retired after nearly four decades in coaching.

Next season will be McGriff’s first coordinating a defense at the Football Bowl Subdivision level. McGriff, who last served as a coordinator at Kentucky State in the late 1990s, was on Freeze’s first staff in 2012 as the Rebels’ cornerbacks coach and has also coached defensive backs at Eastern Kentucky, Kentucky, Baylor, Miami, Vanderbilt and Auburn, where he’ll remain through the Tigers’ Sugar Bowl matchup against Oklahoma on Jan. 2.

McGriff left Ole Miss to coach the New Orleans Saints’ secondary from 2013-15 before being hired at Auburn in January. One thing all the stops along the way have taught him, McGriff said, is simple is better.

“When you take your journey throughout the profession and you see playbooks that are so thick it’ll take you almost two semesters to get through them and you’re only going to play 12 or 13 games in a season, it’s just entirely too much defense,” McGriff said.

McGriff takes over a defense that’s 97th nationally in sacks, 110th in total defense, 120th in run defense and 125th in red-zone defense. The Rebels are 50th against the pass but gave up their share of explosive plays through the air, something Freeze is counting on McGriff’s experience coaching up the back end of defenses to shore up.

“I like it that it’s simple,” Freeze said. “Let our kids play, not think. Don’t give up the deep ball, don’t give up explosive plays and stop the run. Playing physically and fast. He’s got some everyday drills that I think will improve us.”

Auburn’s pass defense improved slightly under McGriff, ranking 61st nationally (223.6 yards allowed per game) after finishing 63rd in 2015 (222.5), but the Tigers have been the best in the SEC at limiting that explosion, holding offenses to a league-low 10.7 yards per completion. Auburn is also fourth nationally in red-zone defense, fifth in scoring defense, 20th in total defense, 21st in rushing defense and 37th in turnover margin.

McGriff said the time he spent at the game’s highest level with the Saints taught him the importance of “situational football” while his year at Auburn working for defensive coordinator Kevin Steele furthur strengthened his belief to keep things basic regardless of the situation. He specifically recalled halftime of games this season when Steele would scrap elaborate adjustments if any players didn’t fully understand the concept.

“I think in order to be fast, aggressive and confident, you have to be simple,” McGriff said. “There’s no value to having a ton of checks if the players don’t get it, and that was realized before my eyes this past season with Coach Steele. It may have looked like we had multiple defenses, multiple fronts and coverages, but a lot of them were the same as.”

McGriff will implement a 4-3 defense, but what it’s called is semantics. The defense will be multiple based on the offense’s personnel on any given play, Freeze said, while McGriff has to determine how his personnel fits into the base scheme. Linebacker play was a weakness with starters rotating there for much of the season while the Rebels are losing one of those linebackers, Rommel Mageo, two cornerbacks in Tony Bridges and Carlos Davis and defensive end Fadol Brown.

McGriff has a lot of work to do, but he doesn’t want to overdo it.

“Nowadays with offenses going with multiple formations, you can only have so many defenses you can install because if you put in one coverage with adjustments, it could end up being six or seven coverages,” he said. “We’re definitely going to err on the side of being simple.”