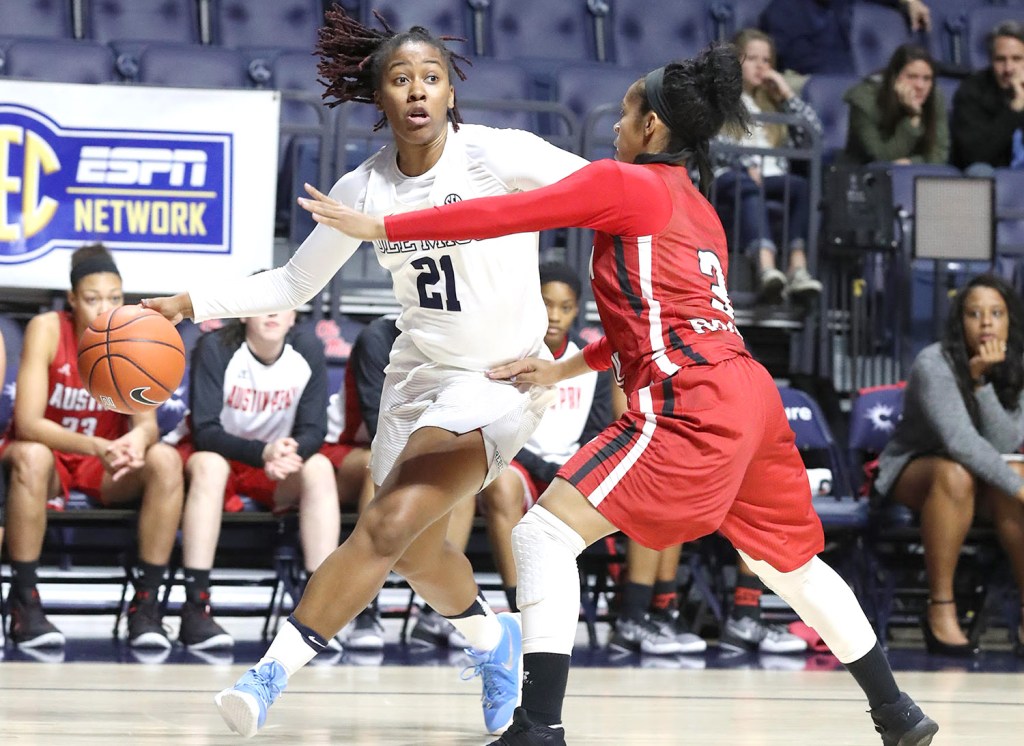 Ole Miss’ women’s basketball team got two votes in this week’s Associated Press Top 25. The only surprise about that for head coach Matt Insell was who cast them.

“I’m stunned that the one voter in the state of Mississippi didn’t vote for us after he sat here and watched us play and dominate an Oregon team that he had been voting for all year,” Insell said. “I was stunned with that. I’m glad that somebody in Norman, Oklahoma paid attention to it and got us in there.”

Ole Miss picked up its latest win with a 66-38 victory over Austin Peay on Tuesday at The Pavilion. The Rebels (10-2) are 9-0 at home, their best start in their own building since winning their first 11 at home a decade ago.

The Rebels have won four straight, including a 16-point win over then-No. 25 Oregon, with their losses coming at UNLV and West Virginia, both top-60 RPI teams. Ole Miss began the night with an RPI outside the top 100 because it’s only played five teams with a winning record, but the Rebels have been winning convincingly with a 30-point margin of victory.

Ole Miss will stay home to finish the non-conference slate Dec. 28 against Mississippi Valley State before the schedule gets considerably tougher in Southeastern Conference play starting with a 10-1 Arkansas team on New Year’s Day. The Rebels went 8-5 in the non-conference last season before stumbling to a last-place finish in the conference with just two league wins, but Insell is steadfast in his belief that things will be different for a team he believes has the pieces to finish in the top half of the SEC.

“As I said in the preseason and the preseason media day, if we’re not in the NCAA Tournament, then we’ve underachieved in the league,” Insell said. “I’m really happy with where we’re at. I think this team is equipped to make a big run in league play.”

Chrishae Rowe led the Rebels with a game-high 20 points off the bench Tuesday while Erika Sisk followed with 16, but it was the defense that again set the tone for Ole Miss, which has given up the fewest points in the SEC. The Rebels grabbed a double-digit lead late in the first quarter and held Austin Peay (6-7) without a field goal for nearly seven minutes in the second to take control with a 32-15 lead at the break.

The lead grew to as many as 30 early in the fourth quarter. Tearra Banks led Austin Peay with 13 points, getting off 14 shots to expose what Insell said is his team’s biggest problem area.

“We’ll get back on the 26th and start working on (post defense) right away because when we get in league play, we’re going to play the Tennessees, the South Carolinas, the Mississippi States who’ve got big kids in there,” Insell said. “We’ve got to be a lot better guarding the block.”

Austin Peay struggled to get many clean looks, shooting a season-low 24 percent from the field and making just one of its 17 3-pointers against the SEC’s leading 3-point field goal percentage defense in its lowest scoring output of the season. Ole Miss has held seven of its opponents to 50 points or less.

Ole Miss had 13 steals but scored just eight fastbreak points, leaning more on patience in the half-court to get nearly any shot it wanted. Rowe (8 of 11), Sisk (6 of 13) and Manuel (4 of 7) combined to shoot 58 percent from the field with the Rebels getting 48 of their points in the paint and shooting just eight 3-pointers.

“I’m proud of them for clicking in there and getting us a win,” Insell said.

Watch Insell talk about the win and the attention his team’s getting in the video below.