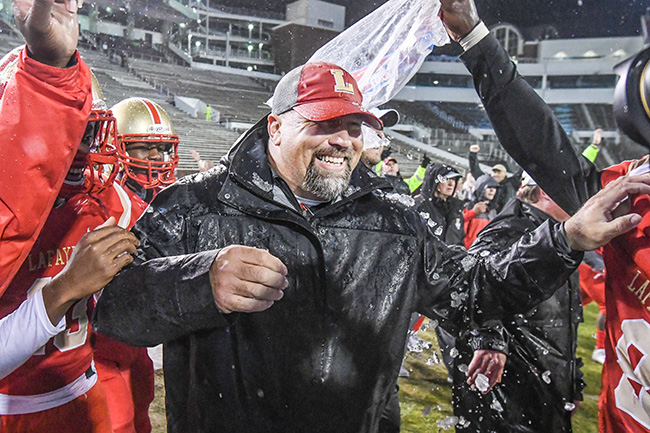 Lafayette head coach Micheal Fair, center, led the Commodores to the MHSAA Class 4A state championship in his first season.

One coach met or possibly exceeded his expectations for the 2016 football season, depending on who you ask, while another coach may have fallen short of his, if you ask the same people.

Lafayette’s Michael Fair and Oxford’s Chris Cutcliffe are coming off their first years as head coach of their respective football programs. One is no stranger to the head coaching duties while the other got his feet wet in that position for the first time.

Fair joined Lafayette back in March, right before spring practices, coming from two years as Senatobia’s head coach and immediately knew he had a good team. Fair took over after Eric Robertson left to become the new defensive coordinator at Madison Central. Robertson left Fair a team that made it deep into the 2015 playoffs before losing to eventual Class 4A champion Noxubee County.

Fair felt confident with the returning pieces he could take them one step further or beyond.

Fair did just that as he led Lafayette to their first state championship since 2011, defeating Poplarville inside Davis Wade Stadium earlier this month. After dropping the first two games, the Commodores never lost again. This was not Fair’s first rodeo as a head coach and winning a state championship as he had experience in the private school and public school sector, including time as an assistant under Ricky Woods at South Panola.

“I think the stops I made really prepared me for a place like Lafayette,” Fair said. “Not much can walk through that door that surprises me anymore. … You get to see it all, and there’s nothing like experience. I was able to learn from some really good coaches when I was an assistant to help me deal with some issues.”

New Charger in charge
Across town, Oxford was adjusting to a regime change of sorts. Longtime head coach Johnny Hill had retired during Christmas break after the 2015 season only to resume coaching defense with his son at New Albany this year, and the Chargers were in need of a replacement before spring drills. They found their man in Cutcliffe. Chris, the son of former Ole Miss head coach and current Duke head coach David Cutcliffe, had been an assistant coach under Hill for the previous five seasons but was promoted to the first head coaching job of his career.

The Chargers lost a lot of their offensive production as well as talent on both sides of the football, though Cutcliffe felt his team could weather early storms and make a run at a fourth consecutive Class 5A state championship game appearance.

The Chargers fell short, placing third in the Region 1-5A standings and losing to eventual 5A champion West Point in the second round.

“I think we had a group of seniors who did an outstanding job and had a great career,” Cutcliffe said. “It didn’t end quite exactly how they wanted it to end but I think they had a lot to be proud of for what they accomplished in their time at Oxford.”

Making the transition from assistant to head coach was fairly simple for Cutcliffe since he had helped with the offense and been in the system at Oxford for several years. It was the responsibilities off the football field that came with the new job that he had to get accustomed to, something he never had thought about until the time came to handle them.

“People always talk about that you have so much to do and it doesn’t even have to do with football,” Cutcliffe said. “Just all the administrative side of things. That is definitely true. There is so many other things that go into running a football program that as an assistant coach you don’t have to spend a lot of time on. But as a head coach, it takes up a big percentage of your time.”

Those will not be a problem for Cutcliffe next year as he will know what is expected of him come the 2017 season. His focus is now on the upcoming offseason program and spring drills once the new year begins. When he took over last winter, there was not a full coaching staff in place for the spring. That is not the case this year, and with the jump to Class 6A coming next August, spring practice will be the next big test in Cutcliffe’s young tenure at Oxford.

“This year I’m excited about a full offseason with our coaching staff and doing everything that we can do for our 2017 team to have a great first season in 6A,” Cutcliffe said. “Obviously it’s a great challenge. It’s the highest level of football in our state. We look at it as an exciting thing. It makes every day that much more important. Every day of our offseason is crucial to compete at that level.”