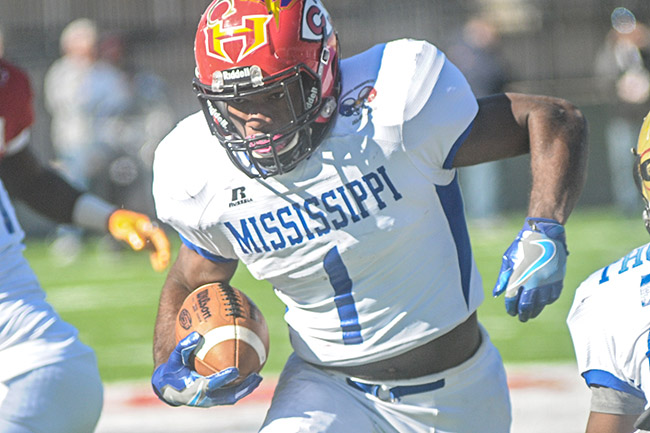 Ole Miss lost to Florida State to start the 2016 season, they closed the year by losing to the Seminoles as well. Clinton standout and top running back recruit Cam Akers chose where he would continue his football career and it will take place across state lines as the senior selected to play for Jimbo Fisher and Florida State.

Akers made the announcement at a ceremony held inside the Mississippi Sports Hall of Fame in Jackson by picking up the Florida State hat with is family surrounding him. He noted he made his final decision about two days ago. Top Southeastern Conference schools missed out including Ole Miss, Alabama, LSU, Georgia and Tennessee.

Florida State had been gaining traction for Akers, who moved up his decision to Tuesday from his orginal date of the Army All-American game next month, in recents weeks as the Seminoles and Tigers were the biggest threats to pull Akers out of Mississippi and away from Ole Miss the next three to four years.

“It was just the best situation for me and my family all around,’ Akers said after his selection. “I never wanted to go too far away from home. (Tallahassee, Fla.) is not that far. It’s a great situation for me. I just fit the program well.”

Akers led Clinton to a 14-1 record and the schools first ever state championship earlier this month, defeating Pearl 49-35 in the MHSAA Class 6A state championship at Davis-Wade Stadium in Starkville. Akers accounted for all seven touchdowns either by arm or by foot and was named the most valuable player.

Recruited and viewed as the nation’s top running back recruit, Akers proved to be a versatile threat for the Arrows this season. He was the top quarterback, throwing for a team-best 31 touchdowns and 3,128 yards while also rushing for over 2,105 yards and 31 touchdowns on 242 carries. The success on the field earned him the Mississippi Gatorade Player of the Year as well as numerous national honors

With Florida State presumably losing Dalvin Cook to the NFL Draft, LSU was another fit as Leonard Fournette has already bolted for the draft, the Seminoles were a prime target for Akers to being playing next season. LSU and Ole Miss also provided that option. Being personally recruited by Fisher was something Akers’ took into consideration when deciding.

“It definitely impacted it a lot,” Akers said. “I’m looking forward to staring my career there. …You can’t make any promises, it’s all up to me. I know Dalvin is leaving and the starting spot will be up for grabs in my eyes. I’m going to go there and try to get it.”

Akers was viewed by many recruiting sites as a high probability to land at Ole Miss, bulking up the Rebel offense that includes sophomore quarterback Shea Patterson and receivers A.J. Brown, Van Jefferson and D.K. Metcalf. That leaves Ole Miss with the running backs they have returning in Eric Sweeney, who will once again be returning from a season-ending injury he suffered against the aforementioned Seminoles. Jordan Wilkins will also be in the backfield along with Sweeney.