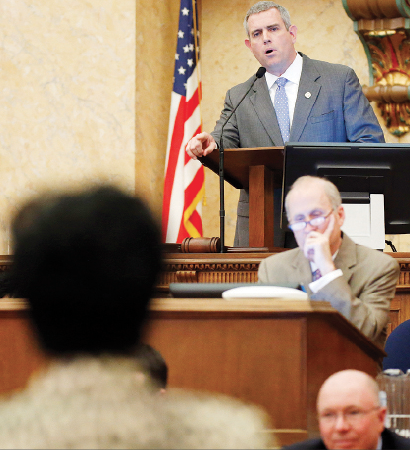 “We’re not looking to decrease the amount of money we put in education,” Gunn told Mississippi Today in an interview on Wednesday. “I think we are looking to make it more efficient.”

Some state education advocates have raised concerns that a rewrite of the Mississippi Adequate Education Program, or MAEP, by New Jersey-based nonprofit EdBuild is a veiled attempt to cut school funding.

Indeed, overall K-12 school funding has increased in recent years, even with across the board state budget cuts ordered by Gov. Phil Bryant the past two years. The total appropriation for K-12 education for this fiscal year is $2.58 billion, up from $2.34 billion in 2012.

Gunn said the major purpose of the rewrite of state funding and his primary goal in pushing for a rewrite is to cut down on administrative costs and increase spending on instruction.

He referred to a 2015 report by a legislative watchdog agency analyzing school district spending between fiscal year 2005 and fiscal year 2014. Out of the seven major budget categories, “instruction” — defined as the salaries of teachers and other professional personnel — was the only category to decline.

The report showed that while administrative spending increased by around $15 million during that time period, instructional spending decreased by about $130 million. Spending on plant operations, food services, student support and transportation also increased, according to the report.

Gunn said he admired how the Clinton Public School District operated during his time on that school board.

“They do a very good job of … being efficient with administrators,” he said. “In Clinton, as I recall when I was on the school board … some of the younger grades had just one administrator. Clinton is unique in that we have one school for every two grades except for high school, and I think at the high school they have a couple of assistant principals.”

Because EdBuild, the new and relatively unknown group hired by the Legislature, has indicated the new formula would be student-based as compared to program-based, Gunn and his policy team believe issues such as administrative spending could potentially be taken care of in the formula.

Gunn also said he hopes that with a push to make spending more efficient, extra dollars are freed up to reduce class sizes.

“I met with a lot of teachers during the off season. And I said, ‘If you could have one thing, what would it be?’ (And they say) small classes,” Gunn said. “They don’t ask for a pay raise … they say smaller class size.”

Gunn also addressed suggestions that tying funding to individual students is a move to allow state funding to more easily be used through vouchers or charter schools. Sen. Hob Bryan, D-Amory, one of MAEP’s authors, is among those who has raised such a concern.

“I don’t know of any proposal on the horizon for that,” Gunn said. “We passed charters three years ago … The program is working, we’re going to see how that goes and let that run for a while.”

“And again, charters and all those types of programs are designed solely to provide increased educational opportunities for some who don’t have it,” Gunn said. “That’s why it’s limited to areas where schools are not performing well.”

Charter schools in Mississippi are currently restricted to school districts rated C, D and F. Opening charters in A and B-rated districts would require approval from the district’s school board.

In her first presentation at the Capitol, EdBuild CEO Rebecca Sibilia repeatedly said EdBuild believes in a student-based formula, or one that determines a base student cost for a regular student. The formula then can be adjusted by adding funds, or weights, for students with certain needs or circumstances. These can include academic status, economic status and any special education requirements, among others.

The MAEP formula the state uses now is what EdBuild refers to as a “hybrid” model, meaning some parts of the formula are student-based while others, such as special education funding, are based on teacher units. The new formula Sibilia advocates presumably would eliminate the “program-based” components.

In the time since Gunn and Lt. Gov. Tate Reeves announced in October that they were hiring EdBuild, some have expressed skepticism, asking how legislative leaders know the MAEP doesn’t work if it’s routinely underfunded.

The skepticism heightened after a legislative committee drafted and passed a policy making the Legislature’s no-bid contract with EdBuild (and all of its contracts) secret. It was only released after the Legislature received a backlash of negative attention and Attorney General Jim Hood wrote a letter to legislative leaders saying their policy was not legal.