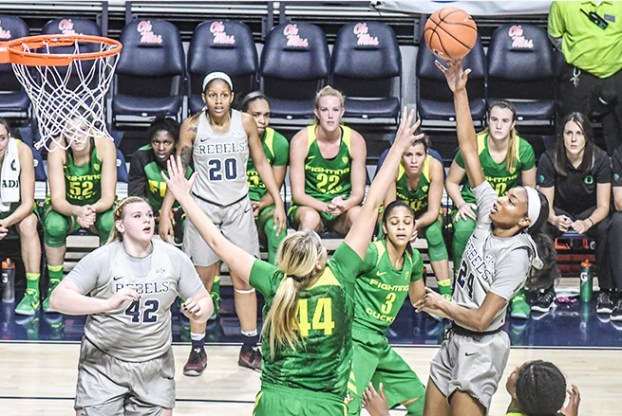 Ole Miss forward Bretta Hart attempts a shot against Oregon on Dec. 14. The Rebels are off to their best start under head coach Matt Insell and will attempt to start the season 10-0 at home on Wednesday against Miss. Valley State. (Bruce Newman)

When Matt Insell is asked the reason why this year’s team is any different from his previous three teams during his tenure at Ole Miss, he gives a fairly simple answer.

That may be an honest statement as Ole Miss (10-2) is off to their best start in Insell’s first four years with the Rebels and have one more non-conference game on Wednesday against a 3-7 Mississippi Valley State team (6 p.m., SECN+) before hosting Arkansas on Sunday to open up Southeastern Conference play.

There could be a lot of factors in play as to why Ole Miss is starting to find success once again in their women’s basketball program, but the biggest of all are the pieces Insell has put together on the court. The transfers of senior forward Taylor Manuel from Loyola Chicago and junior guard Chrishae Rowe from Kentucky are paying dividends along with the players already here and with some freshmen stepping up in just their first 12 games of their career. Manuel is averaging nearly 10 points per game (9.75) as well as just over four rebounds a game (4.4). Rowe has made just as much of an impact but in a fourth of the time. She did not make her Ole Miss debut until the Oregon game on Dec. 14 but is already averaging 18 minutes a game as well as 13.3 points per game after playing three games.

Of the returning players, Madinah Muhammad leads with a team-best 14.6 points per game while Shandricka Sessom is putting up 13.2 points a game. Oxford native Erika Sisk is scoring right at 10 points a game. All are above their season average from a year ago except for Sessom, who is about two points less through 12 games.

Making the turn
While it is not as publicized beyond one story or press release, the women’s program has had to deal with their own NCAA issues, mostly from an administration previous to Insell’s. Adrian Wiggins was hired to replace Renee Ladner in the spring of 2012. Before he could even coach one game later that fall, Wiggins was fired in October. Insell was hired the following year but had to deal with the infractions imposed by the violations of Wiggins and his staff.

Fast forward three years and three and a half seasons later, the program is starting to find its footing under Insell with this season’s start the example of that. Ole Miss narrowly missed a chance to upset a top-15 team in West Virginia, falling by five points in early December, but then defeated then-No. 25 Oregon for the program’s fourth win over a ranked opponent under Insell.

After the Rebels wrap up a six-game homestead with Arkansas, they will have four of their next five games on the road.

Replacing Tyrell Price and what he did during his final two seasons at Lafayette is a tough ask of anyone,... read more