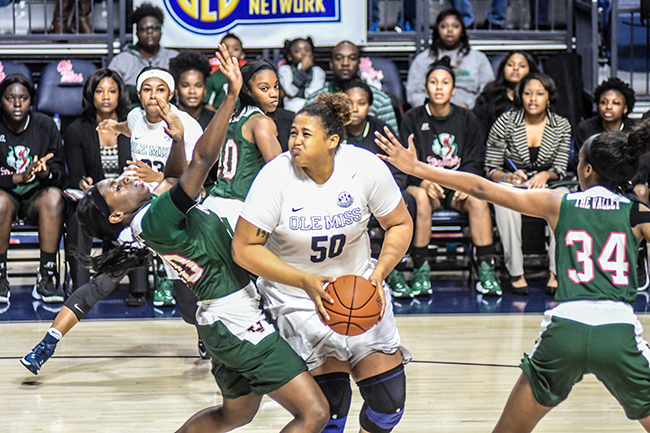 Christmas was this past weekend and the Ole Miss women’s basketball team took some time off to be with friends and family and to rest before beginning the Southeastern Conference slate of their schedule. The time away from the court showed as the Rebels looked sluggish at the beginning of their 67-30 win over Mississippi Valley State on Wednesday night inside the Pavilion.

The win improved the Rebels to 10-0 at home and their best start under head coach Matt Insell. It is also the best start at home since beginning the 2006-07 season with 11 straight wins.  The 11 non-conference wins are the most since the 2008-09 season when the Rebels won 13 out of conference games.

“The toughest two games of the year is the one before Christmas and the one after Christmas,” Insell said. “We took a little different approach and didn’t rush our kids back. We had a lot of rust. …Glad to get the win. We didn’t shoot the ball extremely well.”

The game against the Devilettes was the final tune up for Ole Miss (11-2) who opens up SEC play on Sunday and wrap up their current six-game homestand with Arkansas (4 p.m., SEC Network). It was a game of sloppy play in the first half as the Rebels created Mississippi Valley to turn the ball over 18 of their 40 times in the first half. Ole Miss, who finished with 17 turnovers of their own, could not cash in though, scoring only 15 points off the turnovers in the opening half.

“I think we’re fine,” Insell said. “We played pretty good today, we just didn’t shoot the ball very well. That’s uncharacteristic of us. That comes with getting back in the gym. But in terms of execution on offense and defense, we forced 40 turnovers and never really pressed. We locked in. I got after them at halftime and told them I didn’t like our defensive intensity in the first and second quarter. We’ll get it right.”

Bench play fueled the Rebels as they outscored Mississippi Valley’s bench 35-8. Freshman forward Shelby Gibson came off the bench and scored 13 points in the first half and finished with a game-high 16 points. Shandricka Sessom scored 11 points and Medinah Muhammad finished 10.

The start of the second half saw much more energy from the Rebels as it saw Erika Sisk steal the inbounds pass and follow up with back-to-back layups, fueling a 12-0 run to begin the third quarter. Ole Miss outscored the Devilettes 16-4 in the third period to pull away.

Entering Wednesday’s contest, Ole Miss led the SEC in scoring defense, holding opponents to 50.4 points per game. That defense continued as Mississippi Valley State (3-8) did not have one scorer in double figures. Christina Reed scored a team-high eight points while Lauren Elliot chipped in seven.

“I think we made some progress tonight in some areas we were struggling in,” Insell said.

Following Sunday’s game against Arkansas, Ole Miss will hit the road for four of their next five games.