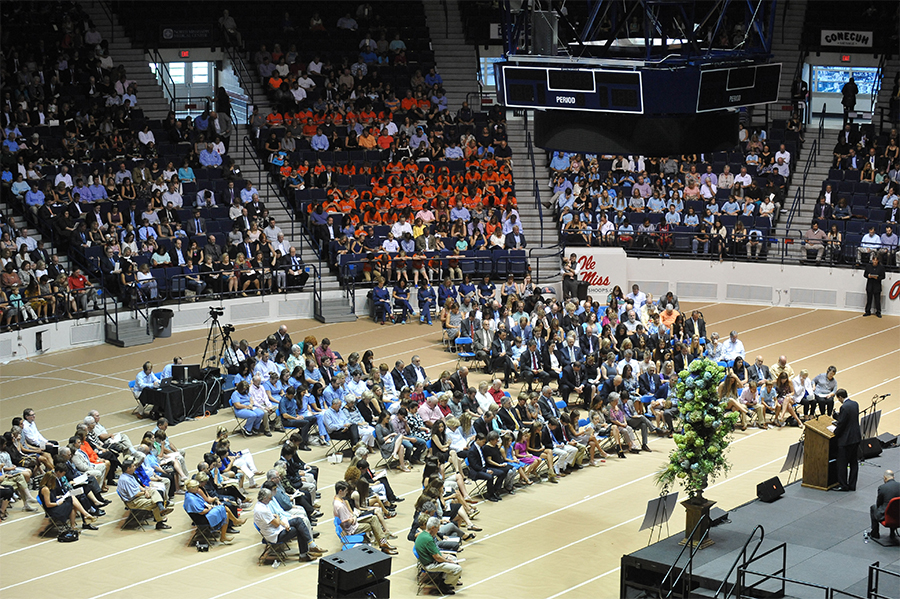 Members of the Farese, Perry, and Poole families, as well as the crowd in the stands, attend a memorial service at the C.M. "Tad" Smith Coliseum in Oxford, Miss. on Saturday, August 20, 2016. The memorial service was held for Dr. Jason Farese and his wife Dr. Lea Farese, Dr. Michael Perry and his wife Kim Perry, and Dr. Austin Poole and his wife Angie Poole, all of who were killed in a plane crash in Tuscaloosa, Ala. on Sunday, August 14, 2016.(Bruce Newman, Oxford Eagle via AP)

Editor’s Note: This is the second of four stories highlighting local news in 2016. Coming up this week:

SUNDAY: Story of the Year

The months of May through August were filled with triumphs and tragedy for the Oxford community.

May started off with a shooting that sent three people to the hospital. The shooting happened in Abbeville and Lafayette County Sheriff’s Deputies arrested Bobby Conner, 37, and booked him into the Lafayette County Detention Center on a $1 million bond.

His victims all survived but suffered critical injuries. The shooting happened after an argument between the four men.

After 35 years, EAGLE publisher Tim Phillips resigned from the newspaper to pursue a career in real estate. His father and former publisher Jesse Phillips died earlier in the year. In June, David Magee would be hired to step into the role as publisher and Alex McDaniel would be hired as editor in July.

During the month of May, after more than two years, the Oxford Downtown Parking Advisory Commission voted to select the spot of Oxford’s future parking garage on the Square to be built behind the Oxford Square North Shopping Center on North Lamar Boulevard.

The Oxford Board of Aldermen later voted to accept the recommendation and plans for the new garage are currently underway.

On May 8, Oxford saw it’s first Pride Parade since 1992 roll through the Square. Hundreds came out to watch the parade that received mostly positive feedback; however, a few protesters showed up with signs, making derogatory statements that were largely drowned out by those there to support the parade.

The rest of May saw mostly positive headlines, such as the James Beard Foundation honoring, “Gravy,” a product of the Southern Foodways Alliance, an institute for the Center for the Study of Southern Culture at the University of Mississippi, as the nation’s best podcast; Journalist Tom Brokaw gave the commencement speech during Ole Miss’s spring graduation ceremony; Baptist Memorial Hospital-North Mississippi held a topping-off ceremony to celebrate the progress of the construction of the new hospital that is expected to be complete and open in November 2017; the late Capt. Max Robert Miller Jr. was named Citizen of the Year by the Oxford and Lafayette Chamber of Commerce, and the Oxford High Chargers beat Hattiesburg 10-0 to win their second straight state title in the MHSAA Class 5A championship baseball series.

In June, the city of Oxford Public Works Department started the prep work to relocate Price Street where it meets with Molly Barr further north to give the Oxford Activity Center more land for future expansions. AT&T brought high-speed internet to Taylor and the historic Ammadelle mansion was sold to the Monteith family, bringing new life to the most famous house in Oxford.

June had its fair share of tragedy as well, however.

Two Pine Flat residents were killed after a long-standing dispute among neighbors. Investigators say, Jose Benitez, 26, shot and killed Melisa Smith, 45, in the home she shared with her husband, Clinton “Michael” Smith, who then shot and killed Benitez after finding his wife on the floor. Smith was not charged in the shooting.

Later in June, a Potlockney man died at Sardis Lake while grabbling for catfish.

Life in Oxford in July was calm and headlines reflected good news for Oxford and Lafayette County Public Schools that retained their A and B ratings, respectively, after the 2014-2015 Accountability Results came out. A  peaceful candlelight vigil to remember recent victims of gun violence around the country was held on the Square, and a 4-year old’s life was saved by quick-thinking Oxford Park Commission lifeguard Laurel Tollison after the child choked on food while swimming at the City Pool.

Then August happened and Oxford residents were taken on a roller coaster ride filled with moments of extreme grief, pride and learning the meaning of being “Oxford Strong.”

On August 14, six Oxford residents were killed in a plane crash, leaving 11 children without their parents. Dentists Dr. Jason Farese and his wife Dr. Lea Farese, as well as Dr. Austin Poole and his wife Angie Poole and Dr. Michael Perry and his wife Kim Perry, where killed when the private plane crashed outside of Tuscaloosa, Alabama. The couples were returning home to Oxford from Florida where they attended a dental convention.

Within 24 hours of the news spreading through Oxford, a community vigil was held in the Grove for the residents to mourn together. A few days later, the community joined once again during a community memorial service for the victims at the C.M. “Tad” Smith Coliseum.

Kendricks is the first-ever Oxford High School alum to make it to the Olympics and is now the first former Charger to become an Olympic medalist. Kendricks finished with a top height of 5.85 meters (19 feet, 2.75 inches).

Tragedy struck again in August when 14-year-old Lafayette County Middle School student Walker Atkinson died in a wreck. Atkinson was driving west toward Sardis Lake when he lost control of his vehicle for unknown reasons, left the road and struck a tree.

But there was more positive news in August as well, with local author, Beth Ann Fennelly being appointed poet laureate by Gov. Phil Bryant and the Oxford Board of Aldermen approving the city’s new Comprehensive Plan, “Vision 2037,” that sets the direction in which city leaders will help Oxford grow and changes the way development will occur over the next 20 years.