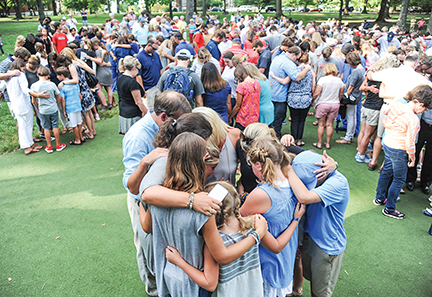 So many headlines seen in the Oxford EAGLE newspaper in 2016 came from events that affected lives or reflected growing pains of the community as more and more want to call Oxford home. There were stories of bravery and triumph and stories that started people’s day off with a smile.

However, there was one headline that caused Oxford to stop in its track and come to their knees – “Plane crash kills 6,” on Aug. 14.

Drs. Jason and Lea Farese, Dr. Michael and Kim Perry and Dr. Austin and Angie Poole were killed Sunday morning when the plane they were traveling in crashed in Northport, Alabama.

The National Transportation Safety Board released its preliminary report 10 days after the crash and reported the cause of the crash was likely due to both fuel pumps failing.

The community immediately responded, showing an outpouring of love, support and grief. Businesses hung black and white signs that read “Oxford Mourns.” A similar logo replaced hundreds of Facebook profile pictures. A community prayer vigil was held the day after the crash in the Grove. Thousands later attended a community memorial service at the Tad Smith Coliseum on the campus of the University of Mississippi.

An account was established for the couples’ children, as well as a memorial page at https://ouroxfordfamily.com.

And then life went on.

John Green, a family friend to all three families, said the children are all doing as well as can be expected and are slowly adjusting to their new lives.

“It’s been a tough time for them,” Green said recently. “It’s only been four months or so but they are all being raised by good, loving people. But it’s still a healing process for everyone.”

The Farese Dental Clinic has been sold to Dr. Earl Stubblefield in Oxford. The Perry’s practice, Mid-South Dental Implants and Periodontics, has remained open through his partner, Dr. Brenda Fowler. The Poole Dental Clinic in Clarksdale is in negotiations to be sold, according to Green.

Green said the community’s support continues to be a ray of light in families.

“So many time since the accident, I heard from so many about how much the Fareses, Perrys and Pooles have helped people and never asked for a pat on the back,” Green said. “I still get asked every day, ‘How can I help?’ The measure of support has been so strong, not just financially, but such a huge outpouring of care and concern. It’s heartwarming and heartfelt that they had so much love for them in this world.”

“It’s so good to see the greatness in this community and its people when times are bad and tragedy strikes, there are so many people here who offer hope.”