With opportunities ahead, Ole Miss men’s basketball looks to respond after blowout loss to Kentucky 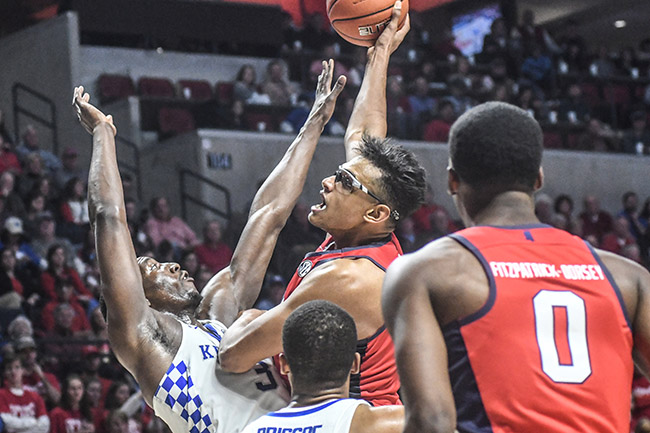 A blend of Kentucky’s five-star talent and Ole Miss’ mistakes led to the Rebels’ 23-point home loss in their Southeastern Conference opener last week, but Ole Miss doesn’t have time to dwell on the past.

Not with a loaded start to its league schedule continuing Tuesday.

Ole Miss will travel to Florida (6 p.m., ESPNU) for the first of back-to-back road games. The 24th-ranked Gators (10-3, 1-0 SEC) have the look of the SEC’s second-best team behind the Wildcats with a No. 2 ranking in the NCAA’s updated RPI ratings coming off an 81-72 win at Arkansas to begin their conference slate.

It’ll be a raucous environment inside the newly renovated O’Connell Center, but Ole Miss coach Andy Kennedy knows his team is capable of putting up a better fight.

“For us, it is what it is,” Kennedy said. “My hope is we can go down and respond from the poor performance we had on Thursday and play better tomorrow night to give ourselves a chance.”

Ole Miss (9-4, 0-1) will then head to Auburn (No. 86 RPI) on Saturday before returning home to take on Georgia (37) on Jan. 11. A trip to South Carolina (51) on Jan. 14 will end a four-game stretch against teams with a combined 37-13 record, which could be as prosperous as it is daunting as the Rebels try to piece together a resume worthy of an NCAA Tournament bid.

“There’s a lot of opportunity,” Kennedy said. “The reality is we’ve got 19 more games. We’ve got to figure it out. (The Kentucky loss) is only one loss thankfully, but we’ve got to look ourselves in the mirror a little bit and get back to our formula.”

Tuesday will be the third meeting between Kennedy and his former assistant, Florida coach Michael White, who played for the Rebels from 1995-99 and was on Ole Miss’ staff from 2004-11. Florida swept Ole Miss last season, including a nine-point win in White’s first trip back to Oxford since being hired as Billy Donovan’s successor.

Kennedy said that familiarity doesn’t necessarily make preparing for White’s team any easier because the familiarity works both ways.

“He and I both have a good understanding of the way his team plays and the way my team plays,” Kennedy said.

A sense of urgency from a Florida squad led by sophomore guard KeVaughn Allen (14.2 points per game) and junior forward Devin Robinson (12.8) that’s missed the last two NCAA Tournaments has been apparent, Kennedy said, but Ole Miss’ coach is more worried about his team and getting it back to that aforementioned formula it needs to be successful.

Senior forward Sebastian Saiz notched his fourth straight double-double with 23 points and 13 rebounds against Kentucky while leading scorer Deandre Burnett finished with 19 points, but the lack of secondary scoring and poor defense put the Rebels in too big of a hole for it to matter. Graduate transfer Cullen Neal went scoreless and had just one assist in 17 minutes while Terence Davis, the Rebels’ third-leading scorer, was held to five points below his average as Kentucky led by as many as 28.

“The thing that probably has befuddled me the most in dealing with this group is I just felt like with the veteran guys that we had coming into the program, we would have a little more stability and a little more poise amidst adversity, and that has not transpired to the level that I would’ve hoped,” Kennedy said. “We’re still new into this journey and we’re learning about each other, and my hope is that we’ll grow into that.”

Ole Miss struggled to contain Kentucky’s speed and rarely offered resistance in the open floor with the Wildcats routinely getting dunks and layups in transition. That will have to improve against Allen, senior point guard Kasey Hill and the rest of Florida’s speedy guards.

“They kind of spread you in the halfcourt and let those fast guards do what they do,” Kennedy said.

Lane Kiffin not staying at Alabama for national title…