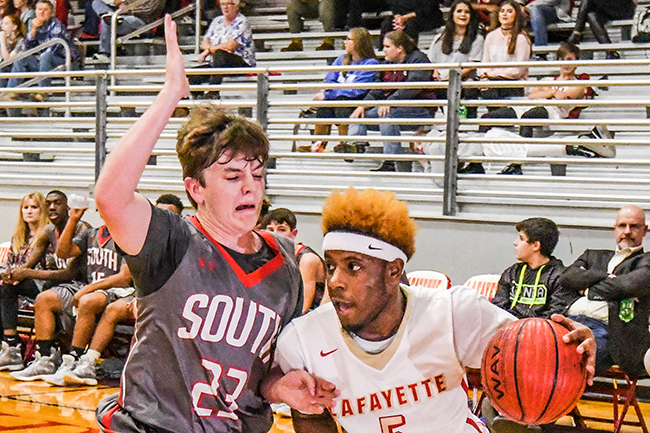 The Lafayette High girls basketball team played their first home game since Dec. 13 and continued their winning ways, defeating South Pontotoc 51-12 for their 14th straight victory. It was part of a sweep over the Cougars as the boys’ team won in the nightcap inside the LHS gym on Tuesday night.

The perfect start to the season has been fueled by fast offense and a stingy defense. It was more of the same for Lafayette (14-0) as they opened the game up with a 20-2 lead over South Pontotoc (1-9). Senior Shaniyah Buford scored 14 points in the opening eight minutes.

The second quarter did not go much better for the Cougars with Lafayette outscoring them 19-3 for a 39-5 lead at halftime.

A running clock in the second half limited scoring opportunities with only three points being scored in the entire third quarter coming off a 3-point shot by Lafayette’s Lauren Wilkinson. The Commodores added nine more points in the fourth quarter while South Pontotoc managed to score seven of their own for the final margin.

Behind Buford’s game-high 16 points, Mariah Holland and Azariah Buford each scored nine points while Wilkinson and Xhiir Burgess each chipped in five points.

Lafayette will continue their four-game homestead on Friday when they host New Albany. It is not a region game even though the Bulldogs are a Region 2-4A opponent. The region game will be played at New Albany on Jan. 20.

They had to grind it out to get there, but the Lafayette boys’ team has managed to find their way back to .500 basketball after holding off South Pontotoc for a 40-35 victory. The win is the Commodores’ fifth in their last seven games.

It was a low-scoring game with Lafayette (6-6) taking a 25-21 lead into halftime, closing out the second quarter with a 9-5 run. Offense continued to be hard to come by in the second half as both teams combined for 29 points.