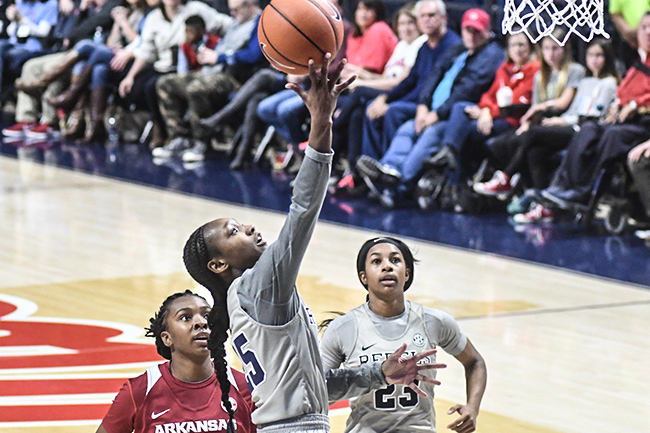 Ole Miss guard Alissa Alston (25) and the rest of Ole Miss’ women’s basketball team will take their 12-2 record on the road for four of their next five games starting tonight at Alabama. (Bruce Newman)

Ole Miss has taken care of business at home. Now the Rebels must begin to have that same success on the road.

After starting the year 11-0 inside the Pavilion, their best home start under head coach Matt Insell and best since the 2006-07 season, the Rebels are 1-2 on the road and winless in true road games. They have a win over Wisconsin during a Thanksgiving tournament in Las Vegas but fell to UNLV in that same tournament and then lost at West Virginia early last month.

The Rebels (12-2, 1-0 Southeastern Conference) get plenty of chances to knock the zero off the win column in the stat as they have four of their next five games away from Oxford starting tonight at Alabama (6 p.m., SEC Network+). They will also play Auburn, No. 4 Mississippi State and No. 5 South Carolina on the road in the next two weeks while Tennessee is their only home game on Jan. 11 sandwiched between them.

“You got to win them all at home,” Insell said. “When we started winning games at home at Kentucky, that’s when our program started to shift. It doesn’t matter who you play at home, you got to win at home because it’s so hard to win on the road.”

The next month provides plenty of potential resume builders for Ole Miss, which is already two wins better than they finished last season and have a top-25 win under their belt over then-No. 25 Oregon on Dec. 14. Wins alone help, but four of their next five opponents are inside the top 25 in the RPI rankings with Auburn, whom the Rebels play Sunday, being the lowest ranked at No. 21 and South Carolina being the highest at No. 3. Mississippi State is at No. 4 while Tennessee sits at No. 14. Alabama (12-2, 0-1) is potentially an RPI buster, sitting at 123. Ole Miss, which has an RPI of 96, will play them twice in the next 17 days.

“We’re going to work on getting these four of the next five out of the way because our schedule will flip after that,” Insell said.

Insell will have his full team for the first time in conference play after not having Chrishae Rowe in the conference opener against Arkansas on Sunday. Rowe sat due to a coaching decision, but Insell said she would be available and will play tonight.

The Crimson Tide come into tonight’s game after dropping their SEC opener, 93-45, on the road at South Carolina on Sunday. The loss snapped a five-game winning streak. Meoshanti Knight leads a group of four Tide players in double figures with 12.8 points per game. Hannah Cook follows with 11.9 points while Shaquera Wade and Jordan Lewis are averaging 11.5 and 10.6, respectively.

“Alabama got beat by 40 points on the road (Sunday), but as I watch them, they’re a pretty good team,” Insell said. “Alabama is a team, we’re going to their place, they’re going to need a home win. When you go on the road it’s hard. It doesn’t matter who you play.”