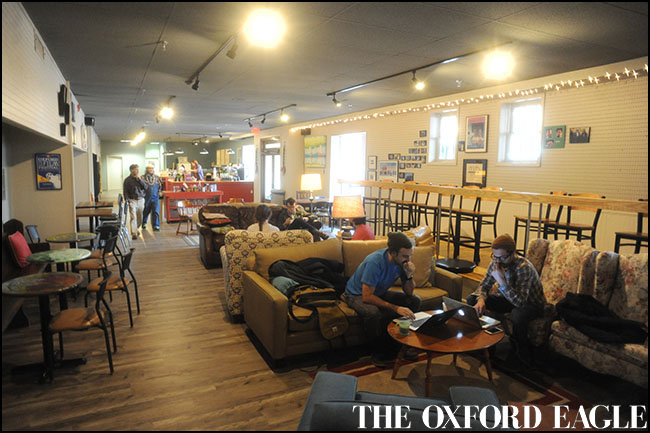 The Shelter on Van Buren will close its doors for the last time on Saturday after being in business on the Oxford Square for one year.

According to a post on the Local Voice’s website, owner Lee Bowie confirmed the coffee shop and music venue would be closing its doors officially on Saturday since there are still three shows booked at the Shelter through the rest of the week.

Bowie, who also owns Cups on West Jackson Avenue, didn’t give a reason as to why Shelter is closing. He confirmed Cups, however, is “fine” and is remaining open.

Since its opening in January 2016, the Shelter has supported the local arts scene, from allowing groups like Oxford Writes to meet each week, hosting dramatic readings for Theatre Oxford, allowing local musicians to share their work or holding events to benefit the Yoknapatawpha Arts Council.

Melanie Addington, executive director of the Oxford Film Festival, said she was sorry to see the Shelter close, which hosted several events during the 2016 Film Festival and events were also slated to be held there in February for this year’s festival.

“Shelter on Van Buren and the Bowies have been instrumental in supporting the arts here,” she said. “I wish that the venue had lasted longer as it was a home away from home for me personally, but also a great partner for the Oxford Film Festival in our first year of year-round programming. They were a special location and will be missed greatly.”

“Now, if someone wants to buy the space for the film fest, we would take it,” she added.

Addington said Newk’s stepped in and is allowing the festival to use its conference room at the University Avenue location to host events and show movies during the festival on Feb. 17 and 18.

Wayne Andrews, director of the Yoknapawthpha Arts Council was also disappointed to learn of Shelter’s closing.

“We’re obviously sad about it,” he said. “Not only personally, but it was a great place to go if you wanted a relaxing breakfast or to have a beer and watch a movie, but they were also such great community partners. They brought in musicians and worked with various organizations, like the Film Festival and the Arts Council. It was open to groups to use the space and it was just a great place to gather. We’re sad for that loss.”

“It had a really unique vibe that was sorely needed in Oxford,” said local resident and musician Daniel Lee Perea. “I enjoyed both playing and attending shows there and hanging out. It was my favorite coffee shop and bar.”