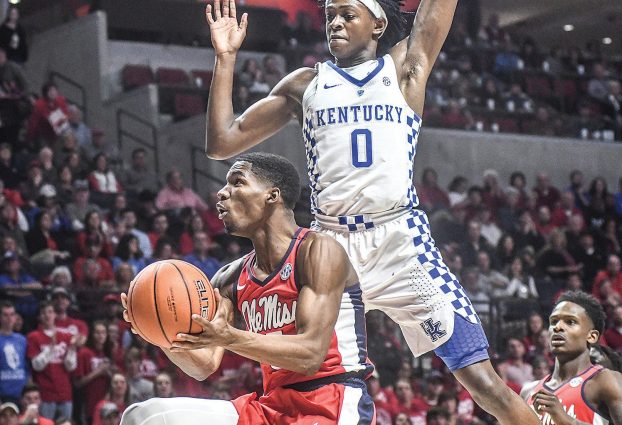 Ole Miss guard Donte Fitzpatrick-Dorsey (0) misses a shot as Kentucky guard De'Aaron Fox (0) defends at The Pavilion at Ole Miss in Oxford, Miss. on Thursday, December 29, 2016. The Rebels get their next opportunity at a Southeastern Conference win Saturday at Auburn. (Bruce Newman, Oxford Eagle via AP)

Ole Miss and Auburn have combined for 19 wins on the basketball court so far, but none of them have come against Southeastern Conference competition.

Something has to give this weekend.

The Rebels’ road trip will continue Saturday at Auburn (5 p.m., SEC Network) in a matchup of teams that have combined to lose their first four league games. It’s a series Ole Miss has owned of late, winning eight consecutive games against the Tigers and three straight at Auburn Arena.

Ole Miss’ first two conference games were against the teams at the top of the league standings in No. 6 Kentucky and No. 24 Florida, but the Rebels (9-5, 0-2 SEC) didn’t help themselves by continuing to sputter in areas that will have to be better Saturday if Ole Miss wants to keep the wins coming against the Tigers, who’ve lost by an average of 15.5 points in the league after going 10-2 in the non-conference under third-year coach Bruce Pearl.

The Rebels have the advantage on the interior most games with senior forward Sebastian Saiz, who’s posted five straight double-doubles, but Ole Miss’ supporting cast has been spotty with its production as of late. Deandre Burnett (18.5) is the only other Rebel averaging double figures in league play with Terence Davis and Cullen Neal, the team’s third- and fourth-leading scorers, having seen a precipitous dropoff against conference foes.

Davis averaged 14.4 points in the five non-conference games he started but is averaging less than half that through the first two league games. He came off the bench against Florida on Tuesday and had just five points and three rebounds in 22 minutes.

Ole Miss turned it over 21 times against Florida, the most it’s had since the season opener, to continue its problem of giving away possessions. The Rebels are last in the SEC at more than 15.5 turnovers a game and are 313th nationally with a minus-2.7 turnover margin.

That could be a problem against Auburn (10-4, 0-2), which is one of the nation’s better teams at taking the ball away with its pressure. The Tigers are forcing more than 16 turnovers per game, which is tied for 23rd nationally.

Auburn is led by five-star guard signee Mustapha Heron’s 15.9 points per game as one of four freshmen starting for the Tigers with the mid-year addition of 6-foot-10 center Austin Wiley. Freshmen Danjel Purifoy (14.2) and Jared Harper (13) are the other Tigers averaging double figures, but Auburn gave up 96 points to Georgia and 80 to Vanderbilt on Wednesday.

Auburn (90) is still in the top 100 of the NCAA’s updated RPI rankings despite its slow start in the league, giving the Rebels another opportunity to add to their postseason resume with a win.