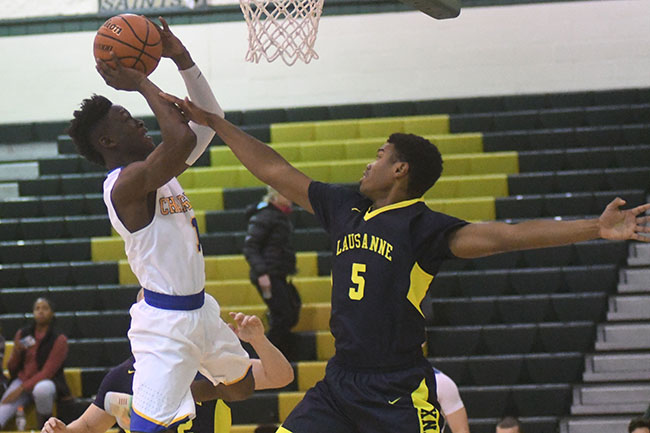 Oxford’s Jarkel Joiner (1) shoots against Lausanne’s Camren Taylor (5) in the Briarcrest Alumni Christmas Classic at Rowell Arena at Briarcrest High School in Eads, Tenn. on Dec. 20. The Chargers will begin Region 2-5A portion of their slate tonight against West Point. (Bruce Newman)

The holidays are over and so is the holiday break for students. For Oxford High’s basketball teams, there was no such break. The Chargers competed in tournaments all across the South in preparation for the second half of the schedule and the start of the games that really matter.

When Oxford begins Region 2-5A play tonight against West Point, it will have been nearly a month since the Chargers played a home game. The last time Oxford was at home was on Dec. 16 when they hosted this season’s edition of the Crosstown Classic against Lafayette. During that time away, the boys played in two tournaments in Tennessee and Missouri while the girls traveled to Hoover, Alabama and played a game in Booneville.

After defeating Lafayette, the boys were a perfect 7-0. Seven games later, their record is not as pristine, but head coach Drew Tyler feels they are better for it. The Chargers went 1-3 at the Briarcrest Tournament just outside of Memphis Dec. 19-22, defeating Overton High School on the final day. Their three losses were by a combined five points, falling to Haywood (65-62), Lausanne Collegiate (61-60) and Arlington (60-59).

“The results me and (assistant coach Tyler) Reed want are kind of unique,” Tyler said. “We’ve got (Terry) Williams and (Jarkel) Joiner as seniors that are getting maximum minutes and both have taken their game to another level. Then you’re mixing in young guys, ninth-graders. We feel like we put them in different settings and environments where trophies are at stake or championships are at stake and having to play back-to-back nights.”

The stretch continued as Oxford played seven games in 11 days, moving to Missouri to participate in the Great 8 Tournament where they played three games in three days. Oxford dropped their first two games to Helias High School (88-80) and Raytown South (75-71) but salvaged a win against Jefferson City (73-67) for a 1-2 record.

Now, Oxford (10-5) must turn their attention to region play after defeating Desoto Central 98-88 on Tuesday for their final tune-up. With the region tournament being held in New Hope next month, the road schedule the past two weeks has provided crucial experience.

“We’ve got to win on the road,” Tyler said. “The (region) tournament is on the road, so you got to do it anyway. At the same time, we saw some really good talent in the Briarcrest tournament, and we had leads in all four games. We’ve got to be able to protect the lead.”

The season has not gone the way Oxford girls coach Cliff Ormon, or his team for that matter, anticipated. Losing seniors Tiara King and Taliyah Gross to injuries sustained in a car wreck right before the season began paired with the loss of their only other senior on the roster in Maggee Hobson choosing to focus on a volleyball career put the Chargers in a hole experience-wise. It has been growing pains since, but Ormon saw some positives during the holidays.

Oxford (5-10) traveled to Hoover for the Big Orange Classic, going 1-3 with their lone win coming against Germantown High School out of Tennessee. They then earned a 62-13 victory over Biggersville at the Kiwanis Classic held at Northeast Mississippi Community College. On Tuesday night, Oxford eeked out a 61-60 win over Desoto Central.

“Definitely saw this team growing,” Ormon said. “We were in every game and again, the best thing about this team is our attitude and effort has not changed with a lot of things that have gone on. Our kids have continued to get better at practice. I’m really encouraged by the kids and the way they’ve handled this year.”

During the five games, there were younger players who took a step forward heading into tonight’s region opener. Sophomore forward Kelsey Wilborn impressed Ormon during the tournament in Hoover. Junior forward Zharia Metcalf and freshman forward Briunna Ducksworth were others that Ormon is seeing improvements in.

“A lot of younger players, freshmen and sophomores, are just growing into their roles,” Ormon said. “It’s not a certain one each night, but they’re all getting better to where if they have the hot hand, we’re sticking with them. They’re getting out there and competing.”