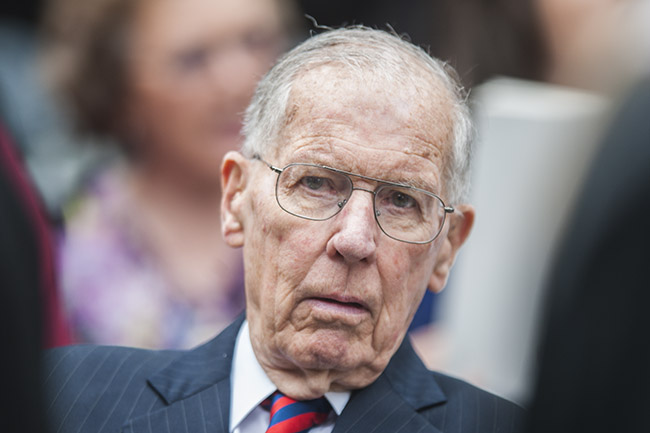 Former Mississippi Gov. William Winter was in intensive care with a concussion Saturday after falling on the steep, icy driveway of his Jackson home a day after a storm coated central Mississippi with sleet as it moved across the South.

Dick Molpus, who served on Winter’s gubernatorial staff, was acting as a Winter family spokesman. Molpus said a neurologist who examined Winter said the former governor also had some brain bleeding but was responding well. Physicians expected to keep Winter sedated and in the intensive care unit of the University of Mississippi Medical Center for one or two more days, Molpus said.

“Recognizing that he is a 93-year-old man, the prognosis for his recovery is good,” Molpus told The Associated Press.

Winter, a Democrat, was governor from 1980 to 1984 and is best known for pushing lawmakers to enact the Education Reform Act of 1982, which set rules for compulsory school attendance, established free public kindergartens and set quality standards for schools and teachers.

“This morning, against the good counsel of his wife, he decided to take his dog Charlie for a walk,” Molpus said Saturday. “He slipped in his driveway.”

Attorney Dorsey Carson, who attends church with Winter, said he and his family drove past Winter’s house while an ambulance crew was tending to the former governor. Carson said Winter’s wife, Elise, found her husband in the driveway and called 911.

Molpus said the former governor’s family “is overwhelmed by the love and appreciation they have heard for William Winter from all over Mississippi today.”

Winter served as co-chairman of President Bill Clinton’s national commission on racial reconciliation in the 1990s. In the decades since leaving office, Winter has remained an advocate of improving education and working to improve race relations as a way for Mississippi to pull itself out of generations of poverty.

“We must make the public investments necessary to ensure that all the elements of our educational system — our universities, our community colleges and our public schools — are at least as good as those in our sister states,” Winter said during a 2005 speech. “Some people will tell you that we cannot afford to do that. I will tell you right now: We cannot afford not to do that.”

Winter served for decades on the board of the Mississippi Department of Archives and History, and the department’s main building in downtown Jackson is named for him.