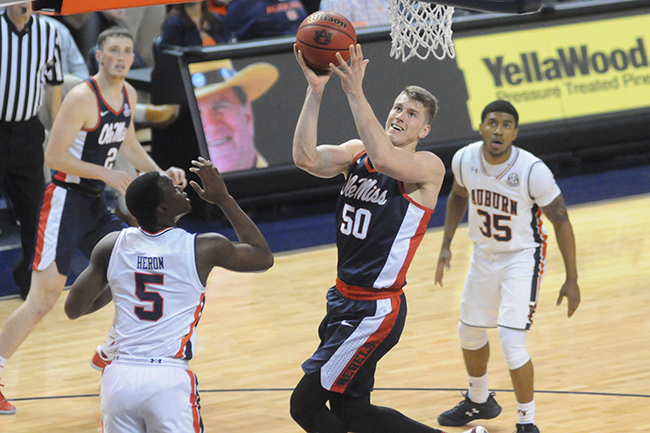 AUBURN, Ala. — Auburn started four freshmen Saturday, but it was Ole Miss that played without poise at times.

Yet it was one of the Rebels’ seniors who delivered some at the end.

Rasheed Brooks hit a 3-pointer with 39 seconds left to put Ole Miss ahead for good, helping the Rebels hold off a late rally by the Tigers to pick up their first Southeastern Conference victory with an 88-85 win at Auburn Arena.

“It’s just good to win,” Ole Miss coach Andy Kennedy said. “It’s been 16 days since we’ve won and we did not play well enough to beat a team the caliber of Kentucky and Florida. It’s easy to drop your head.”

Auburn mounted a 20-8 run in the final five minutes to erase Ole Miss’ 12-point lead before Brooks drained the shot after getting a pass at the top of the key from Deandre Burnett, who was the primary option. The Rebels made five of their last six free throws to stay ahead, and T.J. Lang’s shot to tie it at the buzzer came up short.

Said Kennedy, “He was the guy, and he knocked it down.”

Brooks finished with 10 points and was one of the six players in double figures for the Rebels (10-5, 1-2 SEC), who won their ninth straight in the series. Burnett paced Ole Miss with 18 points while Terence Davis added 16.

Cullen Neal came off the bench and had his most productive performance in an SEC game, scoring 13 points after combining for just four against Florida and Kentucky. A more natural point guard, Neal played off the ball and finished 4 of 7 from the field and 3 of 6 from 3-point range with one assist and two turnovers.

Sebastian Saiz recorded his sixth straight double-double with 14 points and 10 rebounds while Justas Furmanavicius chipped in 11 points and five boards for the Rebels, who needed every contribution to overcome 17 turnovers, a minus-10 disadvantage on the glass and some hot shooting from some of the Tigers’ youngsters.

Jared Harper had a game-high 24 points for Auburn (10-5, 0-3) with 18 of them coming in the second half and 14 coming on free throws. Mustapha Heron had 20 points, becoming the first Auburn freshman to reach double figures in his first 15 games, but the five-star signee was held without a basket after making a 3 to put the Tigers up 47-44 with 15:44 remaining.

Danjel Purifoy, the Tigers’ second-leading scorer, went down with an ankle injury midway through the first half and didn’t return.

Ole Miss used its 1-3-1 trap to slow down the Tigers and erase a pair of eight-point deficits, including a 41-33 hole at the half. The Rebels shot 49 percent from the floor and made eight of their 12 3-pointers in the second half with Neal’s first 3 capping a 20-10 run to start the second half that gave Ole Miss a lead it never lost, though Auburn eventually tied it at 80 on three free throws from Harper after he was fouled by Marcanvis Hymon with 1:02 left.

“We were fouling too much at the end,” Neal said. “Instead of using our feet, we were using our hands. Jared Harper got to the free-throw line a lot of times, and we should’ve played defense and guarded instead of fouled.”

But Neal added, “Holding on to the lead and eventually coming out with the win, we definitely showed some of that (poise).”

Ole Miss will return home Wednesday to take on Georgia. Tip is set for 6 p.m.