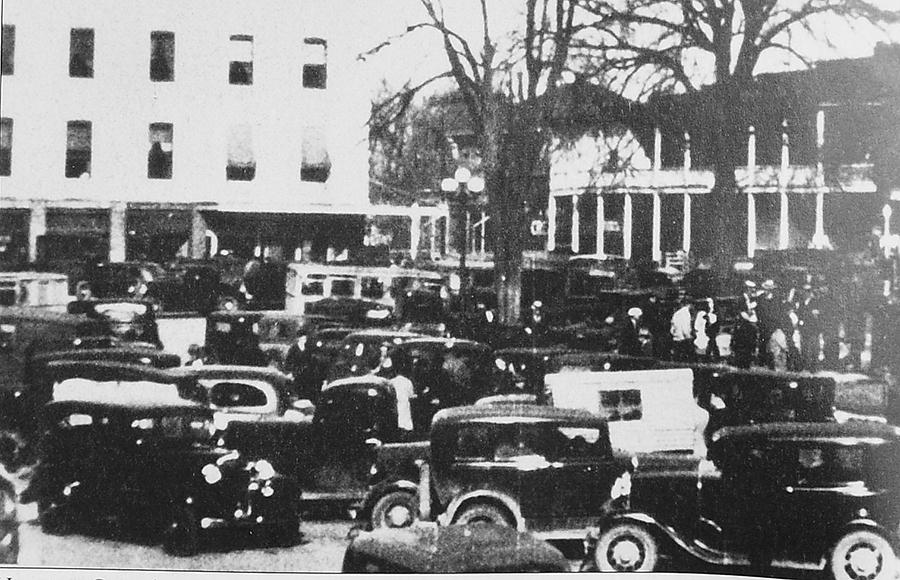 A Saturday on the Square in downtown Oxford. Pictured is the west side of the Square looking toward the present-day Thompson House. Notice the cars are going both ways in this early 19030s photograph.

Recently while doing some research on one of my columns, I ran across an article in the Nov. 12, 1936, issue of the Oxford EAGLE that I thought would be of interest to old Oxford citizens and university students as well.

The EAGLE business review editor, over a period of several weeks, wrote about the department stores, jewelry stores and restaurants that were located in and around the Square. The year 1937 was to be Oxford’s centennial, and the paper wanted to showcase the businesses of Oxford on the eve of the city’s anniversary.

This week I want to write about the seven “cafés” that we had in Oxford to serve the citizens and students. To see how much the eating scene in Oxford has changed in 80 years, all you need to do is pick up the Yellow Pages and count the number of restaurants listed. The number is now approaching 100 restaurants or “cafés” as the EAGLE called them in 1936.

In the winter of 1936, the oldest cafe in Oxford was Buffalo’s Cafe. It had been taken over by a young Oxford man, Grundy Cole, in 1932.The business had been operated by three generations of Buffaloes, all of them named George if I am not mistaken, since 1877.

The first George came to Oxford from Holly springs to open his cafe, which would become “one of the most popular eating places in town. “The EAGLE reported that “famous Mississippians, many of them, have sat up to the marble-topped counter and ordered a cooked ham sandwich or something — not famous then, only students at the University of Mississippi.”

Another of Oxford’s “cafés” was the Colonial Cafe, owned by V.J. Pennington. He had been a jack-of-many-trades, including an auto salesman in the 1920s and a filling station owner. It always amazes me that to own or run a restaurant, most people come to the business by many different former professions. I guess the only prerequisite is you have to like to prepare food and enjoy eating you own cooking.

Bland’s Café was also a popular eating place in Oxford, located on South Lamar, just off the Square. E.A. Bland had been a farmer in the Paris Community and later moved to Oxford and worked in various grocery stores around town. He even had a side job, bringing the Commercial Appeal to Oxford each day from Memphis. That must have been a fun trip back and forth to Memphis in the 1920s and 30s. He opened his restaurant in 1933.

W.H. McNeeley had been a steelworker and powder monkey in a munitions factory before coming to Oxford to the cafe business in 1927. He first purchased a cafe owned by Earl Malone but later sold it back to him and became a barber. Then the cafe business began to look a little better to him and he opened “Mack’s Café” just off the Square on North Lamar. He would later take former Ole Miss football star and professional player, Guy Turnbow, in with him. Turnbow was quoted as saying, “I got a great kick out of playing with and against all the famous All-Americans about whom I had only read — Red Grange, Harry Newman, Bronko Nagurski, Earnie Pinkett.”

The Whitehouse Café was owned by W.W. Miller, who had been a ambulance driver during World War I. He worked in Chilton’s Drug Store on the Square where Square Books is now located. At one time, he owned and operated the “Shack” near the Depot. It was a famed Ole Miss student hangout. In 1934, he opened the White House Cafe next to the Lyric Theatre on Van Buren, about where South Depot Taco Shop is now located.

A former Fuller Brush salesman and cafe owner from Macon opened the Oxford Café on South Lamar, just off the Square, in 1934.L.W. Watt and his wife, Lucille, were the owners. Not much is written about their cafe but there is a great deal written about the last one to be listed in the EAGLE — The College Inn.

The College Inn was constructed in 1935 and immediately became one of the”finest restaurant in north Mississippi.” It was owned by two Greek immigrants, Tom Mistillis and Spiro Vallatos. They hired a chef from a well-know Memphis restaurant, Jim’s Place No. 2. Angelo Karnazio came to Oxford with many years of experience.

I want to save stories about Mistillis and Vallatos for another column. Tom Mistillis would own and operate restaurants around Oxford for many years up until the 1960s. When I was a child, he had a restaurant on Jackson Avenue just across the street from today’s Federal Building. At that time it was the site of the Oxford Elementary School.

Mr. Tom became know as the “Willie Wonka” of Oxford. He had a candy counter in the front of his restaurant that would make all the Oxford kids drool when the walked in the front door and most of us would stop there each morning on our way to school.