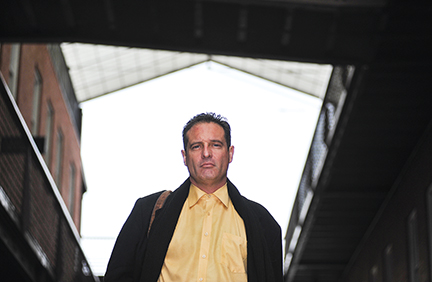 Students in Louis Bourgeois’ literature class will study centuries of great writing from Camus, to Kierkegaard, to Richard Wright. The only difference between this class and a course at the nearby University of Mississippi, is that most of the 40 men signed up to take the class are death row inmates at Mississippi State Penitentiary, the only maximum security prison for men in the state.

Though Bourgeois has been teaching classes at the prison — more commonly known as Parchman — since January of 2014, this is the first time anyone in the state of Mississippi has been allowed to teach in J-Block 29, where the majority of the state’s death row inmates are housed.

The students, who are the most tightly guarded in the state, are allowed only very limited movement. Since the men are not permitted in the prison’s classrooms, the class will be taught from the very center of the unit with students still behind bars.

The response among the prospective students has been overwhelming.

“There are about 40 inmates in J-Block alone, and all of them are taking the class,” Bourgeois said. “Everyone recognizes this is a historical class.”

The men at Parchman are not the only ones who acknowledge the program’s positive impact. Last year, Bourgeois was asked to open a class in Unit 29, which houses the most violent criminals, due to the benefits prison officials noticed in the prisoners who took his class. The Mississippi Humanities Council awarded him with the 2016 Humanities Educator Award and decided to provide funding permanently for the program, instead of providing yearly funding based on a grant application process.

Anderson, who noted that the classes she has attended at the prison are extraordinary primarily for the engagement of the students, emphasized that studying the humanities is important especially for this under-reached population.

“(The humanities) have a humanizing effect on all of us. It helps us realize we’re all humans living together on this planet, and allows us to think contextually — how what we do impacts others, how what others do affects us,” Anderson said. “(Studying history and literature) is beneficial in helping them examine their own humanity and how they live their lives.”

The goal of the course is simple. Bourgeois wants to give the men an opportunity to not just read the stories of others, but also to tell their own story.

“Our goals are simple,” Bourgeois said. “(We want) to allow the inmates in 29 to tell their story.  Most if not all the inmates have been told their whole life they are worthless and do not matter.  These classes allow them to tell the whole world what they are about.”

Bourgeois will then publish the inmates’ writing in the Fall through Vox Press, a literary magazine and 501 (c) 3 organization he co-founded and runs. Vox Press, according to the company’s mission statement, “continues to publish works of experimental literature, chronicling important voices outside of traditional publishing.”

Stories from Bourgeois’ first group of prison writing students was published in Vox’s In Our Own Words: Writing from Parchman Prison, which is available both through the press’ website and on amazon.com.

Though programs like Bourgeois’ have been proven to reduce recidivism and increase job retention following release, these positive benefits do not apply to this new class of men, most of whom are slated to die.

Instead, the benefit is one of forgiveness.

“The reason (we do this) is the same reason Christianity gives absolution for one’s sins: because these prisoners are human beings who still possess consciousness, who suffer and feel,” Bourgeois explained. “Our class serves as a kind of absolution of one’s sins.”