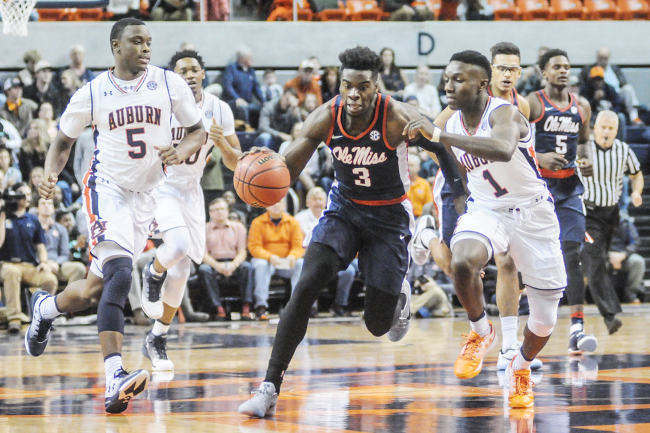 What a difference a win makes.

Ole Miss was overwhelmed by Kentucky and jumped on by Florida to start the Southeastern Conference portion of its schedule with back-to-back losses. It left the Rebels “desperate,” as senior guard Rashee Brooks put it, heading to Auburn over the weekend.

The Tigers tested Ole Miss in a back-and-forth game that saw the Rebels come back from a pair of eight-point deficits to take a 12-point lead late in the second half only for Auburn to erase it in a matter of minutes.

But Brooks answered with a go-ahead 3-pointer in the final minute, Deandre Burnett hit four straight free throws after that to help keep the Rebels in front, and Ole Miss avoided digging itself a bigger hole in a daunting start to its league slate with an 88-85 win.

Ole Miss, which had an RPI of 47 before beating Auburn, gets Tennessee and Missouri after that before starting a three-game homestand against Texas A&M on Jan. 25. They’re opportunities the Rebels will take on feeling a different type of way.

“It feels good man,” Brooks said. “We were down 0-2 and finally got one on the road, so that’s a confidence booster. We’ve just got to try to run some (wins) off now.”

There are still problem areas the Rebels have to address if they’re serious about doing that.

“We changed everything,” Ole Miss coach Andy Kennedy said of the defense. “If we would’ve been able to get a stop down the stretch, I don’t think it would’ve been so tenuous in the last minute.”

Balanced scoring helped the Rebels overcome the deficiencies. Sebastian Saiz (14 points, 10 rebounds) had his sixth straight double-double despite Auburn being the latest team to try to limit the senior forward’s effectiveness with double teams.

The extra attention given to Saiz along with Burnett’s ability to break down Auburn’s defense off the bounce (eight assists) left open shots for others. Brooks, Justas Furmanavicius, Terence Davis and Cullen Neal all finished in double figures with Neal having his most productive SEC game with 13 points after combining for just four points, eight turnovers and three assists in the first two.

“I was just trying to stay aggressive,” Neal said. “I know I haven’t played very well and been kind of disappointed in myself. Just got to continue working hard and playing hard.”

Junior forward Marcanvis Hymon was the only other player to get double-digit minutes with Kennedy relying on his veterans throughout. Donte Fitzpatrick-Dorsey didn’t play while freshman Breein Tyree logged just five minutes.

“That was definitely a game we needed to get,” Neal said. “It’s a road win, and getting a road win in the SEC is always good. I think this will put us on a little run.”