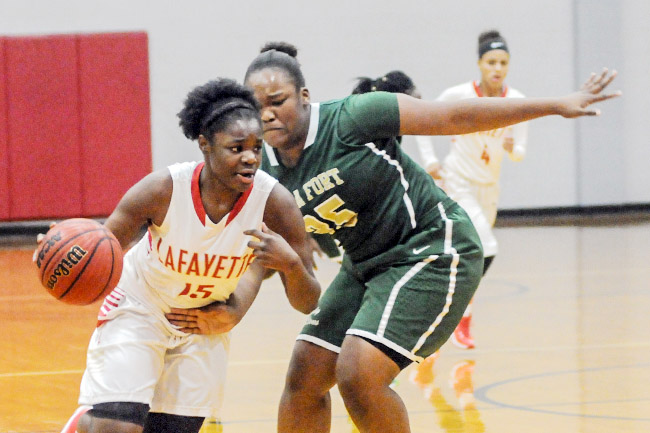 Lafayette's Kimaya Dixon (15) dribbles up court past a Rosa Fort defender inside the LHS gym on Tuesday. The Commodores won their Region 2-4A opener, 81-31. (Jake Thompson)

It is January, which means the schedule begins to get tougher as the march to Jackson begins. For Lafayette, that started on Tuesday night as the Commodores opened up Region 2-4A play against Tunica Rosa Fort. The girls’ team got a bounce back win while the boys’ struggled to find the basket in their loss inside the LHS gym.

After rattling off wins in their first 14 games of the season, the Lafayette girls suffered their first setback in a 59-48 loss to Choctaw Central in the Tangle on the Trail event last Saturday in Pontotoc. Despite a sluggish first half the Commodores got back in the win column, defeating Rosa Fort 81-31.

The balanced offense that Lafayette (15-1, 1-0 2-4A) has relied on all season was slow to show itself as the Commodores managed only 12 points in the opening eight minutes and only 18 more in the second for a 30-16 halftime lead.

“I challenged the girls today in how would we react coming out of a loss,” Lafayette head coach Shayne Linzy said. “That first half, that wasn’t us. It was like we were still shellshocked from Saturday. I told the girls that we were going to find out what we’re made of coming out of our first loss. After the first half I told them we’re in trouble.”

Linzy got what he asked from his team as the second half started with the Commodores pulling away from the Rosa Fort (4-6, 1-1) thanks to a 29-point third quarter led by Shaniyah Buford scoring 13 of her game-high 23 points. Lafayette would outscore the Lions 51-15 in the second half.

“I felt like in the second half we woke up,” Linzy said. “Much, much better second half. …it was undoubtedly Lafayette basketball.”

After getting back to .500 with a win over South Pontotoc last week, the Lafayette boys struggled in their region opener. Points were at a premium in the Commodores’  50-39 loss to Rosa Fort.

Held to only eight points in the first quarter, Lafayette (6-7, 0-1) scored only four more in the second for a 23-12 deficit at halftime.

The low scoring was on both sides, which kept the Commodores in the game but could only cut the deficit to eight points during the second half before Rosa Fort (12-5, 2-1) pulled away in the fourth.

“We gave ourselves a chance,” Lafayette head coach John Sherman. “The ball just doesn’t go in. We had balls roll out, balls roll off. In the second quarter we got impatient and threw the ball away a couple times and started taking some bad shots. That kind of dug the 10-point hole we stayed in the rest of the way.”

Lafayette will play Red Bay out of Alabama on Saturday in the Commodore Challenge before diving back into region play next Tuesday when they host Ripley.