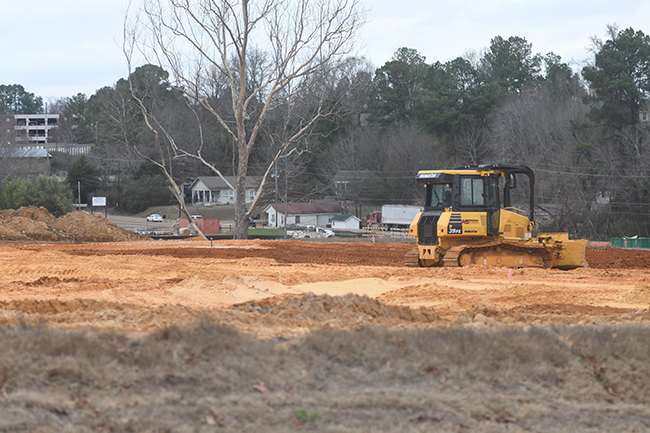 Work is underway to construct The Mill, a new multi-unit housing development inside Oxford Farms, that will built on about 11 acres north of Farm View Drive and west of South Lamar Boulevard. The Oxford Planning Commission approved a site plan on Monday, which calls for 116 units with 318 beds inside 15, two-story residential buildings, along with a clubhouse and swimming pool.

More than 100 residential units will soon be on the market in the south end of Oxford as the Oxford Farms community continues to grow.

The Oxford Planning Commission approved a site plan, Monday, for The Mill, a new multi-unit housing development inside Oxford Farms, that will built on about 11 acres north of Farm View Drive and west of South Lamar Boulevard.

The development will be sold as condominiums and not rental units.

Developers plan on constructing 116 units with 318 beds inside 15, two-story residential buildings, along with a clubhouse and swimming pool.

In November 2015, the commission approved a plan for a multi-unit development known as Vermilion; however, that project was never built.

Commissioner John Bradley asked assistant city engineer Reanna Mayoral what she anticipates the traffic to be like on South Lamar in three years.

“I can’t tell you what it will be like in three years; however, I can tell you the developer has done a traffic study. The city will be putting in a signal at Azalea Drive and Office Park Drive. And when the new hospital is complete, the intersection of Belk Boulevard and South Lamar will be turned into a roundabout. Those changes should help the traffic along South Lamar.”

Developer Andy Callicutt agreed to putting in a left-turn lane into the development, along with other road upgrades.

The commission voted unanimously to approve the site plan.

Also gaining a nod from the commissioners was the final plat for Phase 3 of the Oxford Farms subdivision, which includes The Mill. The Oxford Board of Aldermen will have to approve the final plat before building permits are issued.

Also on Monday, the commission:

• Approved a variance from the parking ordinance for a development at 908 North Lamar Boulevard in a 5 to 1 vote with Commissioner John Bradley being the dissenting vote.

• Approved a request for a 3-foot, 6-inch storm-water depth variance for Oakmont Phases 1-5.

• Approved the final plat for the Glen Alden subdivision on Azalea Drive.

• Approved a site plan for ‘O’Bryan Property located at 1615 University Avenue – a three-story, mixed-use building where the first two floors will consist of commercial retail and the third floor containing two residential units.

• Approved a site plan for three new residential buildings with a total of seven units at 1740 E. Jackson Avenue. The two existing buildings will be demolished.

• Approved zoning the newly annexed 30 acres located east of Highway and north and south of Highway 30 as General Business. However, it was noted that could change if the new city’s new land use categories are approved by the Board of Aldermen later this year as part of the newly adopted Vision 2037 Comprehensive Plan.

• Approved a correction to the Traditional Neighborhood Development Zoning District.