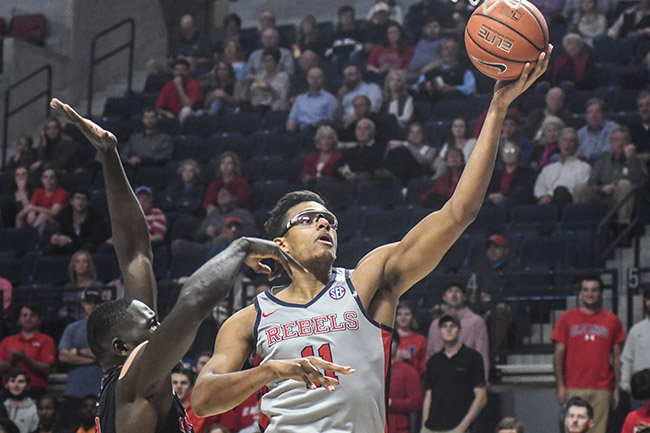 If nothing else, Ole Miss coach Andy Kennedy figured his team would at least knock down free throws.

But things went from bad to worse for the Rebels on Wednesday.

Deandre Burnett went down with a high ankle sprain late in the first half and didn’t return, compounding a cold shooting night for Ole Miss in a 69-47 loss to Georgia at The Pavilion. Terence Davis had 12 points while Sebastian Saiz chipped in 11, but it wasn’t nearly enough for the Rebels, who failed to start their first winning streak in Southeastern Conference play.

Four days after putting up 88 points in a win at Auburn, Ole Miss (10-6, 1-3 SEC) set season-lows for points and field-goal percentage (27 percent). The misses even carried over to the free-throw line, where the Rebels, who began the night shooting nearly 76 percent from the charity stripe, were just 17 of 32 (53.1 percent).

“In your own building, you shoot 53 percent and you miss 15 free throws, four of which are front ends, it’s just a recipe for disaster,” Kennedy said. “I wish I could tell you I saw it coming. I certainly did not.”

Ole Miss played the final 24 minutes without Burnett, who started 1 of 6 from the field and fell to the floor in pain after his final shot. The Rebels’ leading scorer stayed on the court for a few seconds before being helped up and hobbling to the locker room with assistance from trainers.

Burnett was on crutches after the game. Kennedy said he wasn’t sure if Burnett would be available for the Rebels’ game Saturday at South Carolina.

With Burnett out, the Bulldogs’ defense collapsed, making things difficult for Saiz against the Bulldogs’ frontline duo of Derek Ogbeide and Yante Maten, the SEC’s second-leading scorer and rebounder. Saiz was 3 of 9 from the field and pulled down just three boards, snapping his streak of six straight double-doubles.

“That’s what I would do, too,” Kennedy said of Georgia’s double teams on Saiz. “Our other big, (Marcanvis Hymon), is supposed to dive and we’re supposed to fill behind him. We dove him a couple times, he fumbled the ball, miss layups, get fouled, miss free throws. Empty possessions. Why wouldn’t you keep doubling?”

Georgia (11-5, 3-1) took its first double-digit lead late in the first half and led 30-18 at the break. Ole Miss got within seven twice in the second half, the final time at 47-40 with 7:34 left, but Jordan Harris’ 3-pointer made it a double-digit advantage again for the Bulldogs, who led by as many as 23.

Freshman Breein Tyree played 16 minutes in Burnett’s absence and was Ole Miss’ next-highest scorer with nine points. Ole Miss was 2 of 19 from 3-point range and had just four assists.

“I don’t know that it was something that we did,” Fox said. “Obviously you take their leading scorer off their team, the rhythm’s going to be different.”

Georgia made just two of its first 10 shots from the field but hit seven of its next eight. An 18-6 run capped by Frazier’s 3 put the Bulldogs up 26-15 with 5:06 left before halftime.

The Rebels shot just 17 percent from the floor in the first 20 minutes and made just three field goals over the final 12:39 as Georgia held Ole Miss to its lowest point total in any half this season for the 12-point halftime lead.

“I think it was just one of those nights man,” Tyree said. “It wasn’t just one guy that was off. It was everyone. We’ve got to go into practice tomorrow and really work on our shooting and just getting our confidence back up.”

Watch Kennedy talk about the loss in the video below.