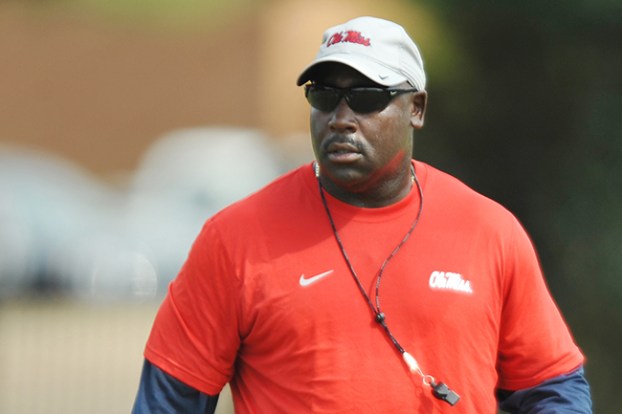 What had been widely reported Tuesday became official Wednesday when Hugh Freeze announced Jacob Peeler as the Rebels’ new receivers coach, putting the finishing touches on the six-week shakeup of his staff following the first losing season of his five-year tenure.

Of course, this is the second receivers coach Freeze has hired this offseason after his first choice, former Oregon offensive coordinator Matt Lubick, left after 10 days on the job for a promotion and a bump in pay as Baylor’s offensive coordinator. Considering nobody will likely be offering Peeler, whose last two seasons at California are his only two as a full-time assistant at a four-year school, the chance to call plays right now, I think this is it.

For starters, risk and reward.

There was little doubt when Freeze decided to make sweeping changes that he would target coaches who could recruit just as well if not better. Show me a successful coaching staff, and I’ll show you a plethora of good recruiters.

Freeze has brought in some good ones with Peeler, defensive coordinator Wesley McGriff and linebackers coach and special teams coordinator Bradley Dale Peveto being the headliners.

McGriff has a reputation as a dynamic recruiter and should be able to eventually raise the talent level of a defense that’s in desperate need of it, particularly at linebacker with the help of Peveto. Freeze still talks about the role McGriff played in helping the Rebels land the likes of Robert Nkemdiche, Laquon Treadwell and Tony Conner in that star-studded 2013 signing class, and McGriff has already made Ole Miss a player for highly-touted safety prospect Devon Hunter, who was likely headed to join McGriff at Auburn before Ole Miss hired McGriff last month.

Peveto helped recruit and develop some of LSU’s best linebackers recently in Deion Jones, Kendall Beckwith and Duke Riley, a name those who closely follow Ole Miss recruiting remember. Jones was a Butkus Award finalist in 2015 before being drafted in the second round by the Atlanta Falcons last year, Beckwith was a Butkus Award finalist this season, and Riley, whom Ole Miss heavily recruited in that ’13 class, was named LSU’s team MVP after leading the Tigers with 93 tackles.

Peeler was a recruiting force thousands of miles away from Mississippi at Cal, which should bode well for Ole Miss now that the Kosciusko native is back recruiting in his home state. Cal’s top signee last year came from Georgia in five-star receiver Demetris Robertson, the Bears’ second-leading receiver this season as a true freshman. Peeler also reached into Mississippi to sign receiver Jordan Duncan from Hattiesburg while helping Cal make a push for Ole Miss’ A.J. Brown, the former Starkville standout who took an official visit to Cal before eventually signing with Ole Miss.

But it’s hard for anybody to recruit against an NCAA investigation, and there’s no question the ongoing probe at Ole Miss is playing a major factor in some prospects’ decisions while scaring others off all together. The Rebels have just 14 commitments with less than a month left before signing day in a class ranked 45th nationally by 247Sports.com, 51st by Scout.com and 62nd by Rivals.com.

Can McGriff, who hasn’t coordinated a defense since his days at Division II Kentucky State in the 1990s, get the players already on the roster in the right position with his play calls? Can Peeler and new defensive line coach Tray Scott, who’ve got a combined four years of experience as a full-time assistant at the FBS level, develop what’s already here? Will the Rebels’ special teams unit make strides under Peveto, who was out of work after being let go by new LSU coach Ed Orgeron with the Tigers among the SEC’s worst teams in punting, punt returns and kick returns this season?

You have to ask the opposite of new offensive coordinator Phil Longo, whose offenses at Sam Houston State put up eye-popping numbers in his version of the air-raid system that hardly ignores the running game. But Longo’s never coached in the FBS, so what kind of pull will a guy who’s virtually unknown at this level have when recruiting 17- and 18-year-olds who want to be shown that you can get them to the NFL?

Head coaches usually get one shot at this kind of overhaul before having to answer for the results. Only time will tell if Freeze got it right.

Who will be Ole Miss’ defensive coordinator? Some old, new names to know

Hugh Freeze has one hire to make and could have more as Ole Miss’ football coach heads into an offseason... read more