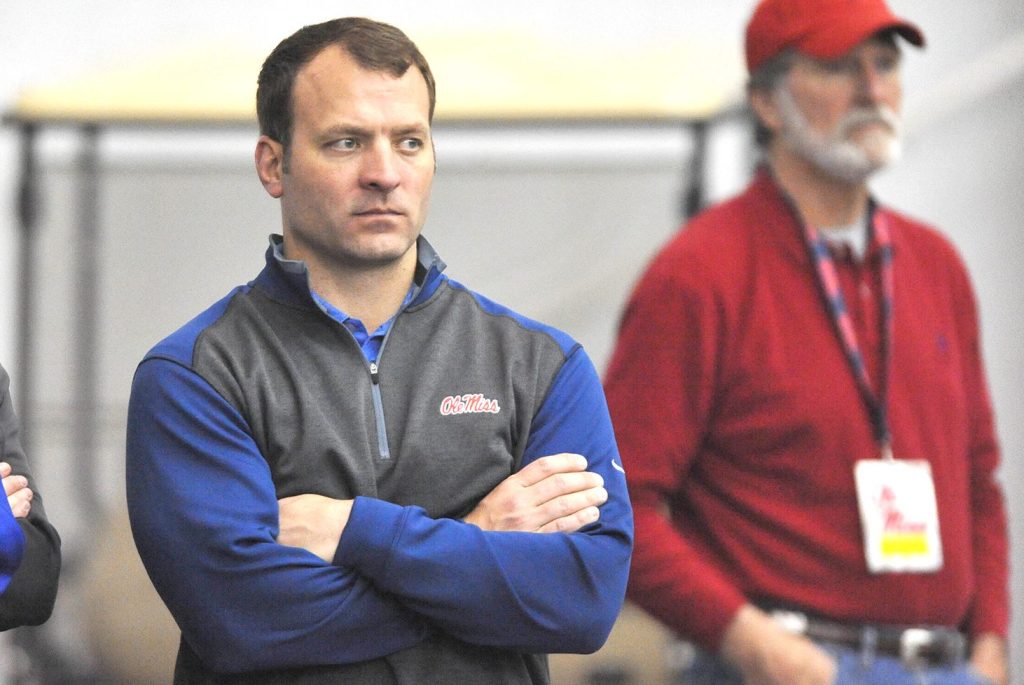 Hugh Freeze’s shakeup to his staff consisted of hiring five new assistants since the end of November with an NCAA investigation hanging over Ole Miss’ football program.

Yet athletic director Ross Bjork said it didn’t affect who the Rebels targeted nor does he think it played a factor in who Ole Miss could lure to fill the vacancies.

“I don’t think it had any impact,” Bjork told the EAGLE on Wednesday.

The changes started with defensive coordinator Dave Wommack announcing his retirement before the Egg Bowl. After a 55-20 loss to Mississippi State capped a 5-7 season — the first losing season of Freeze’s tenure — offensive coordinator Dan Werner was fired while receivers coach Grant Heard left for Indiana and Chris Kiffin (defensive line) and Corey Batoon (safeties coach who had moved to an off-field position) bolted for Florida Atlantic.

Freeze filled out his new-look staff with receivers coach Jacob Peeler, whose hiring was officially announced by the school Wednesday. All but one of the new assistants — defensive coordinator Wesley McGriff — will serve in the same role they did at their previous school.

Peeler, a Mississippi native, spent the last two seasons as California’s inside receivers coach and is coming to Ole Miss only after former Oregon offensive coordinator Matt Lubick, who was originally hired to coach the receivers, left for Baylor earlier this month when the Bears offered a promotion and more pay as their offensive coordinator.

McGriff, who spent this season at Auburn as the secondary coach, is a veteran in the coaching profession with previous stints at Kentucky, Baylor, Miami, Vanderbilt, Ole Miss and the NFL’s New Orleans Saints but has never been a coordinator at the FBS level.

“Obviously we were very, very transparent with the candidates in terms of what we could tell them, what we knew and what we thought was next,” Bjork said. “They had a few questions, but we didn’t lose anybody over it. That’s for sure.”

Longo and McGriff are both on three-year contracts while Peveto has a two-year deal worth $425,000 per season. With Peeler’s contract still in the works, the only assistant with a one-year deal is Scott, who will make $375,000 next season, Bjork said.

Asked why Scott’s contract isn’t also a multi-year deal, which is more the norm for college coaches, Bjork said it had more to do with Scott’s coaching career being in its infancy stages. A graduate assistant at Ole Miss five years ago, Scott’s two seasons at UNC are the only ones he has as a full-time assistant at the FBS level.

“It’s just based on the circumstances for each one of them,” Bjork said. “Most of them are going to multi-year. We’ll adjust if we need to, but right now, you look at experience and you look at kind of what the salary is. Where were they coming from and what were they making? You just kind of look at everything.”

Bjork said the screening process was the same as it would’ve been at any other time.

“We do background checks on all coaches, so we didn’t change anything related to that,” Bjork said. “We did the same exact background checks we do for any coach that we hire whether it’s a volleyball coach or a football coach. Of course it’s a question that people are going to have and should ask, but in terms of cause and effect, nothing that deterred us or deterred anybody else.”