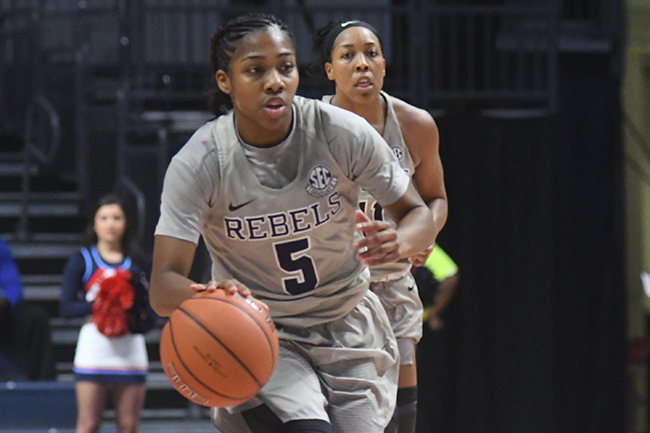 After a tough start to the road portion of their Southeastern Conference schedule, Ole Miss is coming home in need of a win in the worst way.

There is a good news, bad news situation for the Rebels, who are undefeated at 11-0 inside The Pavilion this season, but they are also taking on a Tennessee team that has beaten them the last 28 meetings dating back to 1996. Something will have to give when the two square off tonight at 6 (SEC Network+).

Last week was not kind to Ole Miss (12-4, 1-2 SEC), dropping road contests at Alabama and Auburn after starting conference play with a win over Arkansas at home on New Year’s Day. The road trip saw the Rebels lose by a combined 36 points. It was a 10-point deficit to Alabama (90-80) and a 26-point loss at Auburn (86-60).

It was a different struggle in each game as at Alabama, the Crimson Tide shot 50 free throws, making 36 of them, while Auburn scored 30 points off Ole Miss’ 24 turnovers. Free chances and mistakes are something that cannot occur against a team like Tennessee (10-5, 2-1).

“We got to learn to win on the road,” Ole Miss coach Matt Insell said. “The biggest thing we got to do is be more disciplined defensively and make sure that those things don’t happen. Alabama, it was putting them on the free throw line. Auburn, it was just careless turnovers. But at the end of the day, we’re still the same team that we were before we went over there.”

A return home to take on the Lady Volunteers comes before another brutal road trip next week with stops at two top-5 teams in No. 4 Mississippi State (17-0) on Monday and No. 5 South Carolina (13-1) on Jan. 19.

The Rebels missed good RPI chances last week but will get another crack at it as they will host the Crimson Tide and Auburn later in the season. Tennessee presents another opportunity, coming in at No. 14 in the RPI rankings, while Ole Miss is still hovering around the century mark at No. 104.

Still Tennessee
This is not the Tennessee program of old with the late Hall of Famer Pat Summit at the helm and standing on a ladder cutting down nets on a near yearly basis. The Volunteers have struggled to start the season with four non-conference losses coming before January.

Things have started to turn around though, defeating then-No. 17 Kentucky to open conference play and following it up with a win over Vanderbilt on Jan. 5. Their lone conference loss was Sunday against Mississippi State.

The Volunteers are paced by three players averaging double figures in Mercedes Russell with 16.7 points per game followed by Diamond DeShields (16.5) and Jamie Nared (14.7). Russell also leads in the rebounding category with nearly 10 boards a game (9.9). As a team, Tennessee is pulling down 45.6 rebounds a game.

“It’s still Tennessee,” Insell said. “When Tennessee comes into your house, they’re going to bring a good crowd. It’s like Kentucky in men’s ball. We’ve been beat 28 times in a row by Tennessee. … We got a good team and it doesn’t matter if it’s 1998 or 2017. When you’re playing Tennessee, your kids get up for that game. We’ll get up.”