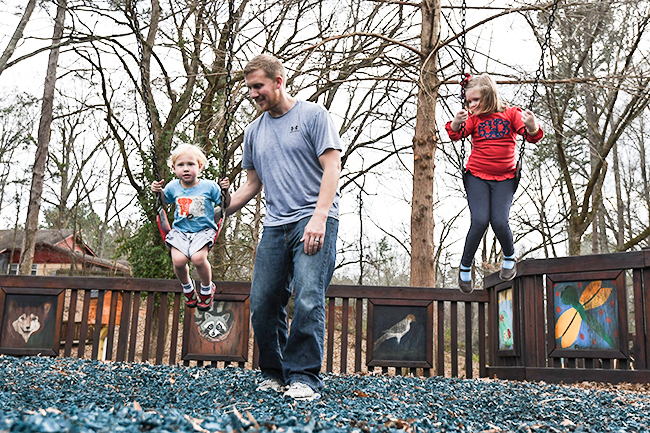 Dave Groves, center, pushes his son Kinston Groves, and his niece Chloe Groves on the swing at Avent Park in Oxford, Miss. on Wednesday, January 11, 2017.

Avent Park is wearing its age well, according to a recent report playground inspection company that recently evaluated the 18-year-old playground.

Oxford Park Commission Seth Gaines presented the report, made by Playgrounds by Leathers, to the OPC board Wednesday morning, that showed the playground is still in good condition but could use a little sprucing up.

“The maintenance team that has been keeping Avent up for the past 18 years really deserve credit for keeping it in as good as shape as it is,” Gaines said.

Last year, Gaines announced he would be starting a fundraising initiative to renovate the popular park that was built in 1998, mostly by community members who helped raise funds for the park and picked up paint brushes and hammers to actually build the park.

Gaines said he’s been working with many of the same community members who were involved in building Avent Park 18 years ago.

The report said the wood decking is in good shape, although showing some deterioration. It recommends either leaving as is and continue to sand and seal, or replace with recycled plastic.

Some of the recommendations included fixing the entrance into the playgrounds and replace handrails to be more Americans with Disabilities Act-compliant; repaint and re-stain, replace some of the older hardware and sand any rough edges.

Gaines originally said he hoped to raise $50,000, but with the results of the report, repairs and upgrades should cost less than $35,000.

“If we raise more than that, whatever is left over will go into a fund for future additions and upgrades at Avent Park,” he said. “Anyone donating money can be assured their money is going toward Avent.”

Some of the recommended changes have already happened, Gaines said, including replacing two slides that had cracks in the bottom part of the slide.

“Those are mostly caused from kids standing on the bottom of the slide and waking up it,” he said.

Gaines said he will present the report by Playgrounds by Leather to the Oxford Board of Aldermen later this month.