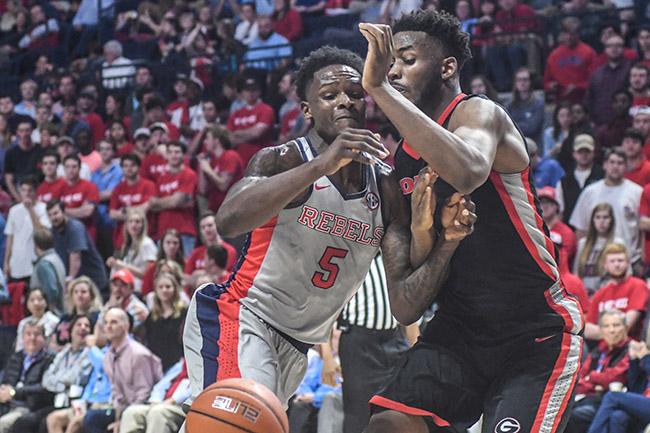 The Rebels’ latest loss came in ugly fashion Wednesday with a 69-47 home loss to Georgia, Ole Miss’ second-worst defeat of the season. With Ole Miss (10-6, 1-3 Southeastern Conference) having nearly 80 percent of its league schedule left starting Saturday at South Carolina, Kennedy was his usual candid self when assessing his team’s prospects going up against the Gamecocks (13-3, 3-0).

“In college basketball, one game really doesn’t determine anything as it relates to the next one,” Kennedy said. “I know we better do a better job in every area to give ourselves a chance. If we don’t improve in every area, we have no chance.”

Kennedy added the performance was “pretty high” on the list of the ones he’s been most disappointed in during his 11 years at the helm, one in which the Rebels had their lowest scoring output in five years and set season-lows in field-goal percentage (27.5), 3-pointers (2) and assists (4).

Leading scorer Deandre Burnett going down with a sprained ankle late in the first half didn’t help. An MRI on Thursday revealed no ligament damage, but Burnett’s status is day to day, Kennedy said.

“He keeps us composed with leadership and experience,” freshman guard Breein Tyree said. “Deandre’s probably our most composed player on the team. Losing him definitely hurt us a lot.”

The Rebels were already down double digits when Burnett left the game with the junior guard missing five of his six shots. Tyree took over most of the minutes at the point in Burnett’s absence but finished just 3 of 8 from the floor, a good percentage compared to Cullen Neal and Rasheed Brooks, who combined to go just 1 of 12 from the field for a backcourt that’s still struggling to complement Sebastian Saiz’s production on the interior.

Terence Davis, who scores most of his points as a slasher, is the only player in the regular backcourt rotation shooting better than 41 percent from the field. All the misses resulted in the minuscule number of assists while Davis, Tyree, Brooks and Neal combined for eight of Ole Miss’ 13 turnovers.

The defensive attention thrown Saiz’s way continues to get more and more aggressive with Ole Miss’ lack of accuracy on the perimeter. Georgia, which rarely double teams in the post, packed in its matchup zone and routinely put two and sometimes three defenders on Saiz, who didn’t record a double-double for the first time in seven games.

Georgia finished plus-10 on the boards, the second straight game Ole Miss has been outrebounded by double digits. Even free throws were a struggle for the Rebels, who are third in the SEC in free-throw percentage yet missed 15 of 32 in the loss.

Saturday presents the Rebels another opportunity against a top-50 RPI opponent, but with or without Burnett, it won’t be easy on the road against one of the nation’s stingiest teams. South Carolina, which trails SEC co-leaders Kentucky and Florida by a game in the standings and hasn’t lost since leading scorer Sindarius Thornwell returned from a suspension three games ago, is third nationally in field-goal percentage defense (36.8) and ninth in scoring defense (60 points per game).

“This is the grind,” Kennedy said. “The grind doesn’t respect anything but the work. You have to put the work in.”