Charlie Mars music on the road feels a lot like home 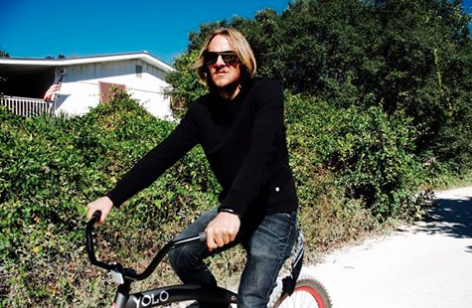 Oxford's Charlie Mars riding a bike on 30A.

One day some years back, while living in different city and facing quite a challenge, an old friend delivered a supportive call from out of the blue that helped the moment.

“I don’t know what to say,” said Charlie Mars, the musician who calls Oxford home. “But I wanted to say that.”

His message, which continued beyond that initial line and revealed that he did in fact know what to say, meant enough that if I am on the road and Charlie Mars is on the road playing in the same place, I try to get to the show.

Not that he needs the support, since he is both good and quite entertaining these days.

For two years running, including this weekend, I have watched Charlie perform to packed audiences along 30A in Florida that spilled out of doorways and filled the standing room.

Mars will give a little nod from the stage my way, showing appreciation, while playing an acoustic guitar and delicately picking vocal grooves of hooks and sinkers that have become his unique sound as a modern day troubadour.

A brief acknowledgement is enough to garner follow-up from others who want to know how I know Charlie.

Not a big deal, I explain. Most everybody in Oxford, his hometown, is Charlie’s friend, and half of Mississippi is, in an alley cat sort of way – him being the cat.

The other of half of Mississippi he’s related to, or at least it seems that way. And he’s got friends from Texas to New York and LA.

But Charlie’s friends and close fans know that, like that cat, he’s hard to get a handle on, so don’t even try. He’ll show up, or call, when you least expect it.

Mars has been moving here and there on his own beat and time for years now and it is working out quite well. Musically, he’s become more predictable, and that’s a good thing, professionally.

As a one-man creative storytelling band who laces humor and well-crafted punches to explain smooth and catchy songs he’s written, before delivering them to audiences set up to grab every crumb he’ll throw their way.

At the end of shows, when fans are finished buying, he’ll pack up remaining CD’s and guitar himself, drive back to wherever he’s staying, alone, and dine while updating social media, himself, to keep the momentum going.

Years before it was a big label, high-profile tours and full-band stage shows, in search of larger fame that got within a flicker. That didn’t quite work out, as the industry changed and the label dropped the contract.

But in picking himself back up, Mars began to piece together success from the bottom up, winning over fans by the roomful around the country.

He found that, along with unapologetic selling of his music – “I’m shipping signed albums for Christmas (gifts),” he posted on social media in December, and you could almost see him taking orders, signing albums, and taking them to the post office for delivery, himself.

That’s a far cry from just more than a decade before, and not where he planned to be, after signing that six-figure deal with the major label. But once that ended Mars either needed to reinvent or get a real job.

Anybody that knows Charlie Mars knows that fighting back and finding a way was the only way. So his real job became the business of music and a re-crafted voice and stage presence.

It’s working out quite well, too, and the crowds he works away from home hungrily grab every morsel he gives them. He typically invokes Oxford at some point in the storytelling, in a prideful manner.

On this night he mentions something about a song and a first cousin in the FBI who also lives in town (Oxford resident Daniel Blount, the husband of St. Leo owner Emily Blount).

Other than Ron Shapiro, who I see quietly approach mid-show and plant a greeting kiss on my wife’s right cheek, the crowd in the panhandle is from Dallas, Atlanta, and other parts in between, and Mars has worked them into a state of enthusiastic delight.

That’s well enough that he doesn’t need any extra moral support from friends. But those little nods remind that he appreciates it, just as I have long appreciated both his talent and friendship.

A trillion reasons why US debt is incomprehensible