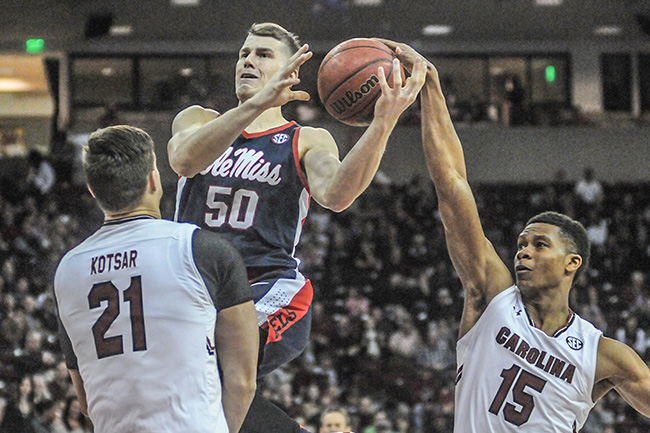 COLUMBIA, S.C. — The recurring issues make it difficult for Ole Miss to win with Deandre Burnett.

Without him, it’s virtually impossible.

Ole Miss struggled to make shots against one of the nation’s stingiest defenses without their leading scorer and didn’t fare well in any other facet in another blowout loss, this one a 67-56 setback to South Carolina on Saturday at Colonial Life Arena. The Rebels (10-7, 1-4 Southeastern Conference) have lost four of their last five games, the last two by a combined 33 points.

Burnett, the SEC’s fourth-leading scorer at 18 points per game, watched from the bench in street clothes with a protective boot on his left foot after suffering a high ankle sprain in Wednesday’s loss to Georgia. Freshman Breein Tyree got the start at the point, but whether it was inside or out, the Rebels rarely got clean looks at the basket against the Gamecocks and compounded another off night offensively with more sloppy ballhandling and a weak effort on the boards.

Sebastian Saiz had 11 points and 15 rebounds for his seventh double-double in eight games but was again by himself in terms of consistent production against the Gamecocks, who began the day in the top 10 nationally in field-goal percentage defense and points allowed. South Carolina (14-3, 4-0), which led by as many as 25, held the Rebels to 31 percent shooting from the field and just 29.4 percent (5 of 17) from 3-point range.

Cullen Neal led Ole Miss with 12 points but only got up four shots and committed four turnovers. Terence Davis was 3 of 12 from the field and turned it over six times while Rasheed Brooks and Tyree combined to shoot 29 percent (5 of 17) from the floor.

The SEC’s most turnover-prone team coming in, Ole Miss committed 21 more against the Gamecocks’ pressure.

“Our issue has been not being able to handle ball pressure, and (South Carolina coach) Frank (Martin) does it as well as anybody in our league most certainly,” Kennedy said. “They’re always up line, in line and fighting you for every inch on the floor. That was not a surprise tactic.”

Ole Miss also finished minus-10 in rebounding (42-32) for the third straight game, a sudden trend for a team that’s in the top half of the league in rebounding this season. It all made a night when Ole Miss forced 20 turnovers of its own and limited South Carolina to 36 percent shooting for naught.

“We guarded with the same energy, desire and spirit even though we shot, what, 30 percent in the first half,” Martin said. “It can’t impact the desire and impact you play with defensively, and it didn’t.”

South Carolina took its first double-digit lead on Silva’s old-fashioned three-point play with 2:07 left in the first half. Marcanvis Hymon picked up his fourth foul shortly after that, leaving Saiz and Justas Furmanavicius to log most of the minutes down low the rest of the way for a frontcourt that’s been thinned out because of an injury (Karlis Silins) and a dismissal (Nate Brooks).

It was part of a 13-3 run that put the Gamecocks up 34-20 at the break. Ole Miss went scoreless over the final 4:06 and ended the half with more than twice as many turnovers (14) as field goals (6) before more of the same from the Rebels allowed South Carolina to run away with it.

Watch Kennedy talk about the loss in the following video.