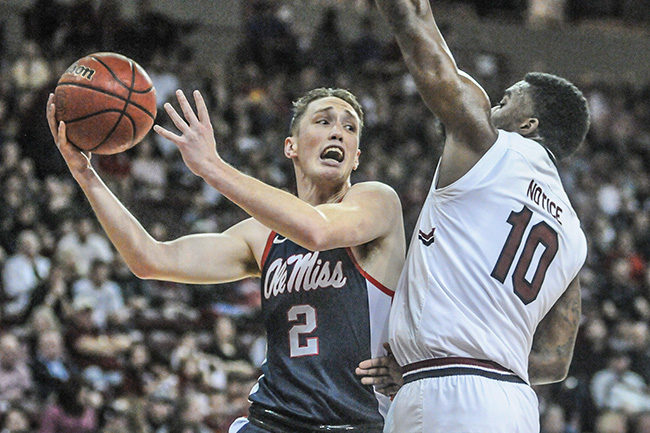 COLUMBIA, S.C. — Ole Miss’ slide here in the beginning of the Southeastern Conference schedule continued Saturday with a 67-56 loss to South Carolina that was worse than the final scored would indicate. The Rebels have lost four of five after going 9-3 in the main portion of their non-conference schedule.

Here are three takeaways from the Rebels’ latest loss:

South Carolina’s defense too much

Ole Miss is struggling to score against average defensive teams right now, so it wasn’t all that surprising that South Carolina imposed its will defensively.

Without leading scorer Deandre Burnett (and honestly, probably even if Burnett had played), Ole Miss was overmatched by the Gamecocks’ suffocating pressure. The Rebels had just one field goal through the first six minutes and change and had just six of them at halftime, shooting 26 percent in the first 20 minutes.

The Rebels didn’t help themselves by failing to finish at the rim when they got the chance, but South Carolina’s relentless man-to-man defense sped Ole Miss up, the turnovers kept coming, and the Gamecocks’ 14-point halftime lead only increased until the Rebels made things somewhat respectable with a late spurt once the game was well in hand. The Rebels had 14 turnovers in the first half and finished with 21, continuing their season-long issue of protecting the basketball.

The way things are going right now, Sebastian Saiz needs to go for 20 points and 20 rebounds a game for Ole Miss to have a real chance.

Cullen Neal made three of his four shots and finished with 12 points, but the Rebels’ backcourt isn’t offering much collective assistance with the way it’s shooting and handling the ball on the perimeter. Neal was the only member of the usual backcourt rotation (Donte Fitzpatrick-Dorsey played 10 minutes at the point with Burnett out and was 1 of 3) who made more than 38 percent of his shots.

Neal also committed four turnovers. Terence Davis, the Rebels’ third-leading scorer, missed nine of his 12 shots and turned it over six times. Rasheed Brooks nearly had as many turnovers (2) as baskets (3). Freshman Breein Tyree got the start for Burnett and coughed it up just once against South Carolina’s pressure defense but made just two of his nine shots.

A lot of teams struggle against the Gamecocks. Defense is their staple under head coach Frank Martin, but Ole Miss’ perimeter shooting has lacked all season. Davis is the only backcourt regular who’s shooting better than 41 percent from the floor with most of his buckets coming on drives to the basket.

It’s allowing defenses to sag off and crowd Saiz, who shot just 3 of 10 from the floor. Getting Burnett back will help some, but the Rebels need others to step up and help take some of the pressure off those two.

“That’s our fault,” Neal said. “We definitely have to make shots to help Sebas out. That will open it up for him in the paint. I guess we’ve got to get in the gym.”

The Rebels are going to struggle to make it to any kind of postseason tournament playing like this.

Ole Miss isn’t shooting it well enough, gives up entirely too many possessions with the most turnovers in the SEC and isn’t good enough defensively to make up for those deficiencies against the better teams on its schedule. And suddenly rebounding has become an issue as the schedule has gotten tougher for the Rebels, who are fifth in the SEC in rebounding margin but have been beaten by double digits on the boards in each of the last three games.

The Rebels need wins, and the slate gets a little easier the rest of the way with Kentucky, Florida, Georgia and the trip to South Carolina out of the way. There are still some shots at top-50 RPI wins (Baylor, Arkansas and South Carolina at home to end the regular season).

There’s still time to turn things around with 13 games left in the regular season, but Ole Miss isn’t going to do it if it doesn’t improve across the board.

Next up: Ole Miss will host Tennessee at The Pavilion on Tuesday. Tip is set for 8 p.m.