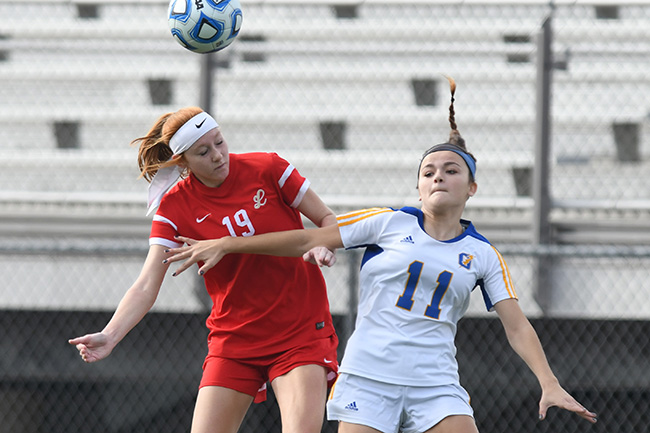 The girls soccer edition of the Crosstown Classic belongs to Oxford this year. For the second time this season, the Chargers defeated Lafayette, this time by a score of 4-0, on Saturday at Bobby Holcomb Field. It completed the season sweep as Oxford previously defeated the Commodores 8-0 on Dec. 6.

The win kept the Chargers perfect on the season, improving to 14-0 while Lafayette fell to 6-8-2.

Unlike the first meeting between the two teams last month, the scoring was held in check for much of the game, as Oxford scored only one goal in the first half off a penalty kick by Addison Mills just outside of the Lafayette box in the 36th minute. It was not the Chargers only scoring opportunity of the game as Oxford dictated the offensive pace the entire 80 minutes but could not put the ball in the net. The Chargers eventually created some separation in the final ten minutes as Morgan O’Connor scored her two goals within a minute of each other in the 72nd and 73rd minute, respectively. Ally Shinall would follow a couple minutes later for the winning margin.

(Lafayette) gave us a good fight,” Oxford head coach Hunter Crane said. “We expected that. We needed that. We needed 80 minutes of fight and that’s what they gave us. …Four games in five days probably has a lot to do with it. Three games in three days, that’s tough on anybody.”

With only one more week left of the regular season, rest would be optimal for Oxford, who completed a stretch of four games in five days after Saturday’s win, but with a key match on Tuesday against Saltillo at home to potentially clinch the Region 2-5A championship as well as another region game at West Point on Jan. 20, that may not be an option for Hunter Crane’s squad.
The defending Class 5A champions clinched a playoff berth last Friday with a 10-0 win over New Hope and improved their region record to 4-0.

“This week was real good for us,” Crane said. “Helped us get back in rhythm and get back in our game shape. I really wanted to see that. It will be good to have a couple days here to kind of get our legs back under us.”

Lafayette’s postseason chances are looking just as good, sitting atop the Region 3-4A standings with a 4-0 record and games against Senatobia and Cleveland, who’ve they already beaten once, upcoming this week. Heading into Saturday’s game, the Commodores had won four of their last six games, with a loss and a tie mixed in.

“I’m so proud of these kids and the work they’ve put in,” Lafayette head coach Melinda Scruggs said. “You can tell we’re kind of own our way up, which is where you want to be at this point in the season. …I think we’ve grown all the way around. We made some changes within our system. We made some changes our personnel and moving them around a little bit.”