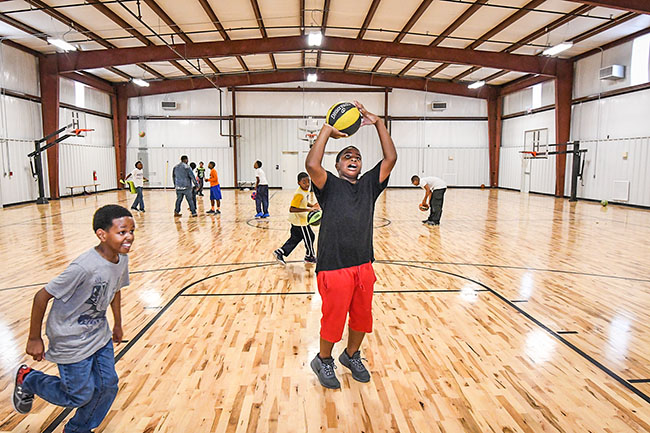 Taye Tallie plays basketball at the newly renovated basketball courts at the Boys and Girls Club, in Oxford, Miss. on Friday, January 13, 2017.

On any given day, the Oxford Barksdale Boys & Girls Club is filled with more than 100 children, exercising their bodies as well as their brains.

Part of that group includes teenagers up to 18 years old who wanted a space of their own, and thanks to grants, they’ve finally gotten their wish.

The new Teen Center was officially opened in December after a $452,000 renovation and expansion project.

According to Tommy Oliver, director of operations for the Boys & Girls Clubs of North Mississippi, the renovations included enclosing an outdoor basketball court and an open area on the building’s second floor.

“Now that area can be used year round, even when the weather is bad,” he said. “Our teens, 15-18 said they wanted their own space. It’s a tool we can use to help recruit and retain our teenagers.”

Bathrooms were built and the new space was given a hardwood floor that supports a variety of activities. The interior of the club was repainted and minor repairs were made throughout the building.

Renovations were made possible by a grant from The Bob & Renee Parsons Foundation, Southern Thunder Harley-Davidson and proceeds from the Barksdale Endowment Fund.

Owned by entrepreneur and philanthropist, Bob Parsons, Southern Thunder Harley-Davidson has been a long-time supporter of the Barksdale Boys & Girls Club and the dealership’s 2014 grand-reopening raised more than $110,000 for the organization.

The Barksdale Clubhouse currently has 399 children registered, with an average daily attendance of 140 children, plus hundreds of additional youth participating in various activities provided by the club.