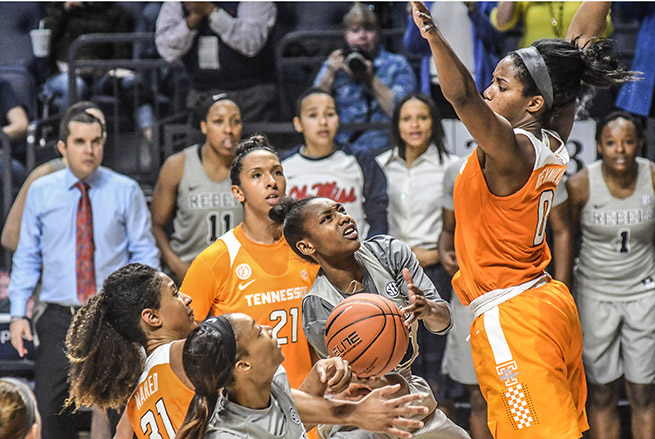 One road test has come and gone with Ole Miss unable to capitalize on opportunities against Alabama or Auburn a couple weeks ago. Another road trip begins tonight with even better opportunities awaiting the Rebels but also against better opponents.

Ole Miss travels south to Starkville for the first of two games this season against No. 4 Mississippi State at The Hump (6 p.m., SEC Network). It is the first of two games in four days against a top-5 team as the Rebels will travel to Columbia, South Carolina on Thursday night to take on the No. 5-ranked Gamecocks.

A road win has become a tall task for Ole Miss (13-4, 2-2 Southeastern Conference) this year. They have only played four true road games away from the Pavilion and have lost all of them. Ole Miss is also riding a 10-game losing skid in SEC road games dating back to the 2014-15 season.

The two most recent losses to Alabama and Auburn involved uncharacteristic play on defense and offense for the Rebels. If they can knock the zero off the road win column this week, it helps them improve a resume that already has two top-100 RPI wins over Oregon and Tennessee.

Ole Miss heads into tonight’s game after ending a two-game losing skid as well as ending a 21-year drought over Tennessee with a 67-62 win at home Thursday. It kept the Rebels perfect inside The Pavilion this year at 12-0 and gives a little momentum into what is undoubtedly their biggest week of the season.

Through the first half of the season, there has not been much Mississippi State (18-0, 4-0) has done wrong. The Bulldogs have dominated their first four games of conference play with their most recent win being an 82-49 romp over Florida on Thursday. It has been a one-sided rivalry for much of this decade. Ole Miss has only won three of the last 14 games played since 2010. The most recent win by the Rebels was an 87-85 win on Jan. 23, 2014 when Kenyotta Jenkins hit a layup to give Insell his first SEC win of his Ole Miss tenure.

Mississippi State is led by Victoria Vivians, who is averaging 16.9 points per game, while Morgan William is scoring 10.9 points a game.