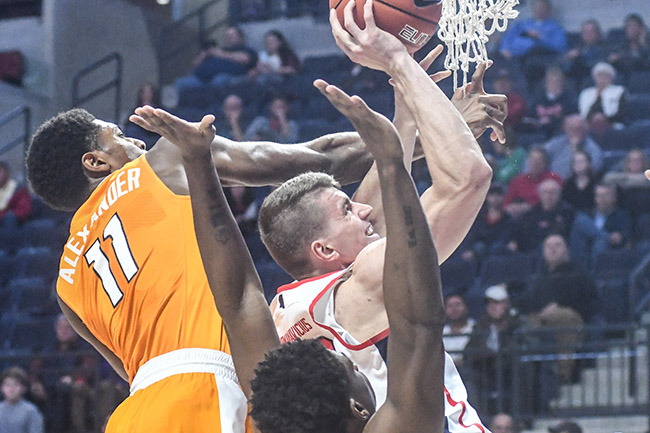 In danger of sliding farther down the Southeastern Conference standings, Ole Miss responded with its first home win of the new year.

Head coach Andy Kennedy would like to think Rasheed Brooks had something to do with it.

Ole Miss rallied from a 13-point deficit for an 80-69 win over Tennessee on Tuesday at The Pavilion, doing it with seven scholarship players once the roster was further depleted when Brooks suffered a seizure early in the second half.

The senior guard fell to the floor with 17:21 left with Ole Miss trailing 44-39 after coughing up an 11-point lead in the first half. Brooks was taken off on a stretcher and taken to Baptist Memorial Hospital in Oxford.

The Volunteers kept their momentum going afterward, starting the second half on a 14-1 run that gave them their largest lead at 52-39.

“Obviously we didn’t respond very good from a basketball standpoint,” Kennedy said. “We were all kind of in a funk. Guys were crying. It was a pretty dramatic event.”

Ole Miss (11-7, 2-4 SEC) was already playing without leading scorer Deandre Burnett, who missed his second straight game with a high ankle sprain, and has lost two frontcourt players to an injury (Karlis Silins) and a dismissal (Nate Morris).

But the Rebels dug deep.

Ole Miss answered with an 18-4 run to retake the lead. The Rebels went up 66-61 before Tennessee (9-9, 2-4) cut it to one, but freshman Breein Tyree hit two free throws, Terence Davis turned a steal into a layup, and Justas Furmanavicius got in the open floor for a dunk to ignite a 10-0 spurt that pushed the Rebels’ lead to double digits in the final minute.

Davis led the Rebels with 20 points and 11 rebounds, Sebastian Saiz had 17 points and 10 boards to become the sixth player in school history with 1,000 points and 800 rebounds in a career, and Furmanavicius added a career-high 15 points and nine boards. Tyree got his second straight start at the point in Burnett’s absence and had six assists to go with a career-high 15 points, 11 of those coming in the second half to help the Rebels end their two-game losing streak and notch their first win at home since a blowout of South Alabama on Dec. 22.

“It might’ve been one of the craziest basketball games I’ve been in,” Saiz said. “I’ve never seen anything like it. … To see the guys regroup, come back and getting a win and you score 1,000 points and you get 800 rebounds, all that happens in the same game in a win that was a must-win that we needed.”

The Rebels shot 48 percent from the floor, a bounceback performance after shooting less than 31 percent in losses to Georgia and South Carolina last week, while holding Tennessee to 35 percent from the field. Tennessee’s leading scorer, Robert Hubbs III, matched his season average of 15 points but had just two in the second half.

“I thought they played harder and with the kind of passion we should be playing with,” Tennessee coach Rick Barnes said. “I don’t know that I’ve coached in a college game or seen a college game where three of their guys (nearly) had double-doubles. That’s just effort.”

Ole Miss scored 42 points in the paint and won the rebounding battle for the first time in four games (50-42), helping the Rebels overcome 17 more turnovers. Only seven of them came after halftime.

“For about a month, I’ve tried everything I can think of to stop us from being so self-absorbed,” Kennedy said. “We’ve been challenging them to get out of themselves, let’s start thinking about others, and let’s surrender to the team. When something so dramatic occurs, it truly forces you — it shocks you — and forces you to stop thinking about dribbling the ball out of bounds, missing a block-out or missing a free throw. It put our focus elsewhere. … That energy carried us home.”

Ole Miss will go for its first winning streak in league play when the Rebels travel to Missouri on Saturday. Tip is set for 2:30 p.m.