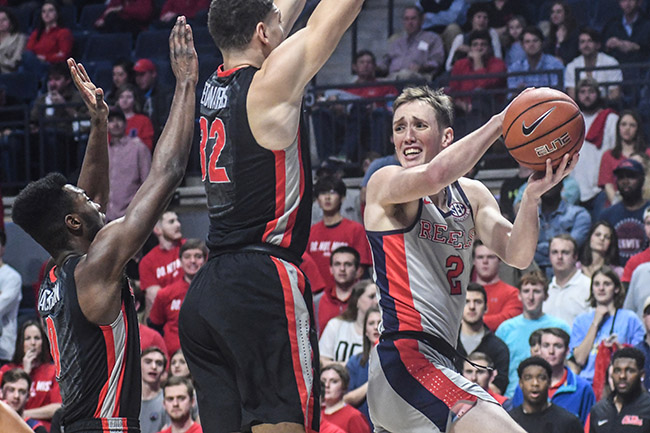 Sebastian Saiz is the No. 1 option. That much Ole Miss coach Andy Kennedy knew.

Kennedy talked often in the preseason about how he expected his senior big man to average a double-double this season. If Deandre Burnett could balance it out by being the Rebels’ primary scoring option on the perimeter, if Cullen Neal could efficiently run the offense at the point, and if senior Rasheed Brooks and sophomore Terence Davis could take the next step in their development, the Rebels would be a problem for teams in an improving Southeastern Conference.

Instead, the Rebels are not only 1-4 through the first three weeks of SEC play but have struggled to stay competitive at times despite Saiz (15.1 points, 11.7 rebounds) being exactly what Kennedy thought he would be because of a backcourt that hasn’t played anything like the coach envisioned.

“I don’t know. That’s our fault,” said Neal, who averaged 12.3 points at New Mexico last season but is scoring just 5.8 in SEC games. “We definitely have to make shots to help Sebas out. That will open it up for him in the paint.”

Saiz is making his shots at a 50.3-percent clip, seventh-best in the SEC, yet Missouri is the only team in the league shooting it worse collectively than the Rebels (10-7, 1-4 SEC), whose league losses have come by an average of nearly 16 points.

Burnett leads Ole Miss in scoring at 18 points per game but has been just as inconsistent with his shot as the rest of the guards. Playing for the first time since his redshirt freshman season at Miami, Burnett is shooting the same 36 percent from the floor as he is from 3-point range while nearly 40 percent of his points (111 of 288) have come from the free-throw line.

“We’re trying to get him more efficient,” Kennedy said. “His percentages need to be better.”

Burnett hasn’t played since spraining his left ankle late in the first half against Georgia last week. Kennedy said he doesn’t know if Burnett will be available tonight at The Pavilion against Tennessee (8 p.m., SEC Network), adding he won’t be cleared until he has his full range of motion.

Neal has moved off the ball as the Rebels try to better utilize his shooting ability, but his accuracy has come and gone. He was a combined 2 of 8 from the floor in the first two SEC games before going 4 of 7 against Auburn. After missing all six of his shots against Georgia, he missed just one against South Carolina on Saturday, finishing 3 of 3 from deep.

“That was the plan, for him to be a point guard, and that just has not come to fruition,” Kennedy said. “Now we’re just trying to find a role for him to make shots.”

Brooks was removed from the starting lineup after seven games and has struggled to find his stroke outside of the go-ahead 3-pointer late in the Rebels’ lone conference win at Auburn. A 38-percent shooter on the year, he’s made just 28 percent of his shots in Ole Miss’ league losses.

Kennedy at times has turned to freshman Breein Tyree, who’s overtaken Donte Fitzpatrick-Dorsey as the backup point guard and got the start for the hobbled Burnett against South Carolina. Tyree had three assists and just one turnover against the Gamecocks but is making less than 35 percent of his shots. Fitzpatrick-Dorsey hasn’t gotten much playing time when Burnett is healthy.

It’s anyone’s guess whether Ole Miss actually holds on to the ball long enough to get off a shot. The Rebels easily lead the league in turnovers with Burnett (team-high 55), Davis (40) and Neal (35) accounting for 49 percent of them for an Ole Miss team with the SEC’s worst assist-to-turnover ratio.

“We’ve got to get our guys playing at an SEC level,” Kennedy said.