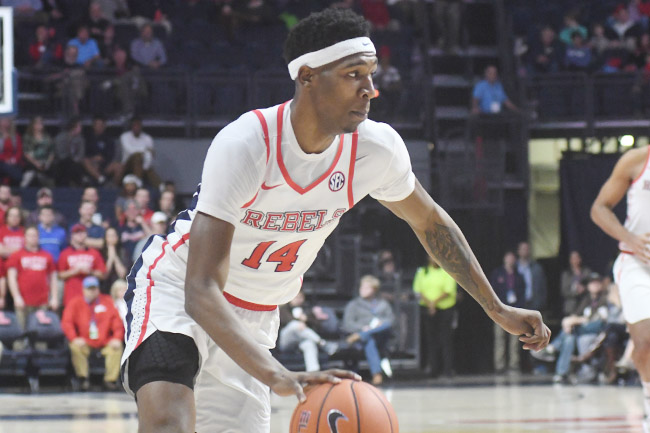 Ole Miss' Rasheed Brooks (14) drives towards the goal against Tennessee at The Pavilion at Ole Miss in Oxford, Miss. on Tuesday, January 17, 2017. (Bruce Newman, Oxford Eagle via AP)

Rasheed Brooks is still recovering from a seizure he suffered during Ole Miss’ 80-69 win over Tennessee on Tuesday at The Pavilion.

Brooks is still undergoing testing at Baptist Memorial Hospital in Oxford while Ole Miss awaits the results, a school spokesman said. The school said in a statement Wednesday that its original statement on Brooks’ status — that he was in stable condition and undergoing further tests — is still accurate.

Ole Miss plays at Missouri on Saturday at 2:30 p.m.

The Rebels’ senior guard was rushed to the hospital after collapsing near Ole Miss’ bench during a timeout with 17:21 left in the game. Brooks was treated by medical personnel before being wheeled off on a stretcher into an ambulance.

Ole Miss coach Andy Kennedy said after the game Brooks was conscious but didn’t remember the episode. Coaches and teammates visited him at the hospital after the game.

“I haven’t seen a lot of seizures in my life,” Kennedy said. “I’m sure I’ve seen a few, but it scared us to death. I’d never really seen anything so up close and personal.

Brooks has played in every game this season with eight starts. He’s averaging 7.9 point and 2.8 rebounds a game while shooting 37 percent from the floor.

Ole Miss trailed 44-39 when Brooks went down and faced a 13-point deficit a couple of minutes after play resumed, part of a 21-1 Tennessee run going back to the end of the first half as the rest of Ole Miss’ players struggled to compose themselves.

Once they got word Brooks was stable, things changed. Ole Miss ripped off an 18-4 run to take the lead with 9:23 left and outscored the Volunteers 12-2 over the final 2:28 to pull away for just its second win in the last six games.

“They took him back to the hospital and somebody told us in the next timeout that he was in the ambulance and he was responding,” senior forward Sebastian Saiz said. “We kind of felt a little bit better about it, but we were still devastated about it.”